Update from the Farley Mowat in Antarctic Waters 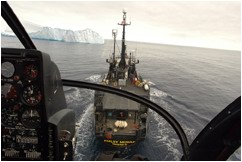 It is now 11 days since the Japanese fleet has killed a whale. They have fled from the far east of the whaling area to the far west and the fleet is now steaming south to attempt to take whales once again.

Three conservation vessels have chased six ships of the whaling fleet for over 3,000 nautical miles without the Japanese being able to shake the pursuit. The Greenpeace ship Esperanza is still on their tail. The Sea Shepherd ship Farley Mowat is en route to intercept. It has been a long chase, over 3,000 miles of stormy and iceberg laced seas. The Greenpeace ship Arctic Sunrise is also on the way towards intercepting the whalers.

If the Japanese fleet has fled to the Western end of the whaling zone to avoid us, they will fail because we are on our way and we intend to disrupt, harass, and obstruct them when we close with them once again.

Eleven days without a whale being killed. Their season is 100 days which means that the combined efforts of Greenpeace and Sea Shepherd have already cost them 10% of the time allotted for their illegal whaling activities. Each day a whale is not killed is a victory for the whales.

There is no doubt that the 2005-2006 Japanese whaling season has seen the most aggressive disruption ever. The Japanese fleet is running scared and we know who they are scared of. Sea Shepherd Conservation Society is not down in these remote waters to protest their activities, we are there to stop their activities.

The Captain and crew of the Farley Mowat will remain in Antarctic waters for as long as their fuel holds out and the ship has not yet used half of her fuel supply. We still have a few more weeks yet to stop the Japanese fleet from killing whales.