Mothers were simply resting and nursing their babies and were not travelling, further highlighting that the area proposed for the Woodside Gas Hub is in fact a humpback whale nursery.

Richard Costin, from Kimberley Whales did a fantastic job of pointing out the exact site of the development and the impacts the project will have on the marine life and environment. Looking at the way the currents move up and down the coast and taking into account the sea grass and corals, it’s easy to see how the proposed dredging for the large ships jetty which will be several kilometers long, will have a catastrophic effect on the local turtle and dugong populations that rely on the sea grass for food.

Richard also pointed out that although the Western Australian state government has declared a marine park in Camden Sound, which is further north of James Price Point, this area is still open to mining and only covers three percent of the entire humpback whale nursery.  "From here through the Lacipede Islands, the work that we've done in the last three or four years has pinpointed this area as being perhaps the most important area on the Kimberley coast for the whales." -- Richard Costin.

Retired Queens Counsel Murray Wilcox, said he was interested in seeing how close the whales intersected with the site of the proposed gas hub stating that "its obviously a very close relationship. I think the Kimberley is one of the most beautiful areas in Australia - certainly one of the most pristine areas - and we have an opportunity to preserve a fairly well untouched wilderness area. If we don't, there will be nothing left for our grandchildren. It is possible to exploit the gas reserves from the Browse Basin without building a Kimberley gas plant." said Murray Wilcox, retired Queens Counsel. He also had high praise for the Sea Shepherd crew stating,  "I think these are people who are very concerned about an issue that should concern us all." 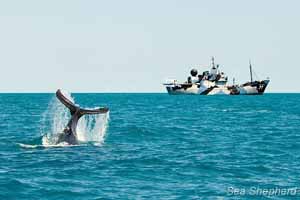 Humpback whale and the Steve Irwin just off James Price PointEnvirons Kimberley spokesman Martin Pritchard agrees. He said research carried out by community volunteers had counted 1441 Humpback whales passing through since July 1, 1200 within 8km of the shore. However, he said the Environmental Protection Authority had stated that on their annual northern migration, about 1000 whales would be expected to go past during an entire season. "In three weeks, just looking four hours a day, we've already had 1200 whales counted and about 90 cow-calf pairs," Mr. Pritchard said. "It's actually proving Woodside and the State Government's research wrong."

All onboard were completely captivated by the marine life that included numerous humpbacks, green turtles, sea snakes, and dolphins and were thoroughly impressed with the beautiful landscape at James Price Point, in contrast to Premier Barnetts comments of the area being an unremarkable part of the Kimberley coastline.

August 8, 2012 – Whales provide the evidence we need against Woodside

The day was packed with numerous whale sightings within eight kilometers of the coast, totalling 120 humpback whales in all. However the highlight of the day was the filming of a calf being nursed, no less than one kilometer off the James Price Point Coast. The footage clearly shows the cliffs of James Price Point in the background. This once again provides further damning evidence that this massive Woodside gas hub will have a disastrous effect on the peace and tranquility of the world’s largest humpback whale nursery. Campaign leader and former Greens leader Bob Brown stated "from the inflatable let me set the scene- mother whale slipping beneath the surface as she came directly at us, baby whale whacking its tail on the surface, three Walmadan folk on a raft and behind, the SS Steve Irwin – these whales were just one kilometer offshore.  And then she, the mother, surfaced and let out a long, melodious sigh!"

Bob Brown and Australian Director Jeff Hansen also went onboard Sea Shepherd's helicopter the Nancy Burnet to get an aerial view of the proposed gas site. Helicopter pilot Captain Roger Danner from Nashville, Tennessee stated, "I am really devastated for the entire world and not just for Australia, the whales will be under immense pressure if this project goes ahead. I have travelled and flown all over the world and what Australia has here is really rare, unique, and precious."

Jeff Hansen stated, "When I saw the layout of the site I felt ill at the scale of what Woodside is proposing off one of the most remarkable coastlines in the Kimberley. If we allow these gas factories to go ahead in the world’s largest whale nursery, our children will never forgive us, we must stand up and fight for the Kimberley."

Bob Brown recalled, "Aloft in the helicopter we looked down on the gas factory footprint – squares and clear-felled inner squares – the size of a city suburb.  A turkey nest dam for sucking water from beneath the plain, a separate 'work-town' square of shipping containers, a security van at the road gate, and nearer the coast, the little camp of the protectors of this country: Goolarabaloo people, whale watchers, other scientists, and ordinary people set up against the world's biggest gas factory." Bob Brown also went ashore to meet with Goolarabooloo senior law boss Phillip Roe to acknowledge his passion and dedication to protect country.

Ship manager Beck Straussner from Lahaina, Hawaii has spent many years studying humpbacks in the wild, but has never seen so many humpbacks in one location and is very concerned for these magnificent creatures. "Australians really need to come and see what is here, I guarantee that if they saw what is at stake here, they would do anything they could to stop the insanity of this Woodside gas hub project."