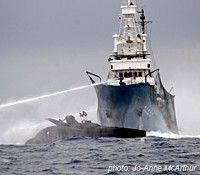 Since arriving in Japan on March 12, 2010, Captain Pete Bethune has become the subject of an international media maelstrom.

While some media continues to theorize and blatantly guess at the situation developing around Captain Bethune’s case in Japan, the reality is that anything Captain Bethune may have done is trivial compared to the actions demonstrated by the Shonan Maru No. 2 captain when he destroyed the Ady Gil and threatened her six crew. Sea Shepherd Conservation Society asks: What is the captain of the Shonan Maru No. 2 being charged with by Japanese maritime or law enforcement authorities?

On February 15, 2010, Captain Bethune peacefully boarded the Shonan Maru No. 2 on his own and faced the full whaling crew responsible for endangering his life and the lives of his fellow crew. His brave actions led to the whaling vessel’s immediate return to Japan from Antarctica, thereby taking the ship completely out of action and saving the lives of many whales.

Sea Shepherd is incredibly grateful for the outpouring of support from individuals around the world regarding Captain Bethune’s situation.

To learn more about how you can help, visit our Support Captain Bethune page.