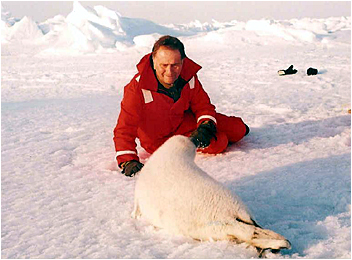 North Thanet`s Member of Parliament, Roger Gale, President of the Conservative Animal Welfare Group has today (Tuesday 15th March) joined campaigners from Sea Shepherd and Respect at the Canada House to protest against the annual seal cull off Prince Edward Island which is now due to commence at the end of this month.

Captain Paul Watson onboard the Farley Mowat said, "Our crew has been greatly encouraged by Roger Gale's opposition to the seal slaughter."

Roger Gale, who has visited PEI and seen the cull for himself at close quarters, said at the gathering, "In 1999 the seal population was estimated at 5.5 million animals and nearly a million have been killed since 2000. Driving the hunt - which has little to do with the conservation of seals or fish stocks - is the steep rise in the value of seal pelts. The price has more than tripled over the past ten years from $20 to $70 dollars due to contemporary fashion and the sad resurgence in the wearing of real-fur clothing.

The method of clubbing seals with a hakapik - which I have witnessed - is a little short of barbaric way of killing an animal. It is claimed that Canadian fishermen are "expert" in the use of this weapon but the rate of slaughter is so fast that frequently the young animals are still alive when they are skinned."

Sea Shepherd and many other animal welfare and conservation organizations are now uniting to urge a boycott of Canadian fish and seafood products worldwide. The intention, described by the Canadian Ministry of Fisheries and Oceans as "blackmail," is to bring home to the hunters and to the Canadian government the message that this slaughter is simply no longer acceptable.

In response to Canadian Minister of Fisheries, Geoff Regan, stating that the boycott is blackmail, Captain Watson said, "Consumers have the right to make moral decisions on the products they purchase. If a person is opposed to the barbaric cruelty practiced by Canadian fishermen then they have every right to express their opposition by refusing to support an industry that is connected to such atrocities. What the Minister of Fisheries calls blackmail is simply the expression of compassion against brutality. The Minister is responsible for a crime of mass slaughter and unimaginable cruelty, he is hardly in a position to judge morality, his actions are despicable and grossly inhumane, and all his spin-doctoring will not detract from the reality that the blood of hundreds of thousands of innocent creatures is his responsibility."