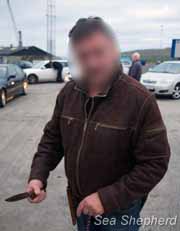 Faeroese local displays his ‘grindakniv’ used to slaughter pilot whales (photo: Simon Ager)On the morning of July 20, several Torshavn locals set up a stand next to the Brigitte Bardot to serve pilot whale meat to those who passed by. Pilot whale meat is so high in heavy metal contaminants that the Health Advisor of the Faeroe Islands, has recommended that the population not consume any of it. The pilot whale meat was offered to the Sea Shepherd crew who all unsurprisingly declined. “Being offered pilot whale meat is like being offered cigarettes at an anti-smoking convention. Not only is it ironic but it is also just as deadly," said Swedish First Officer Peter Hammarstedt.

"I was on the fence about the whole thing, but the grind has gotten out of hand. Too many whales are being killed and the killing methods are inhumane," said one of the new Faeroese crew.

"Somebody has to be the first to oppose the grind. Hopefully other Faeroese will follow our example," said the other Faeroese crewmember, unsure of what kind of reception awaits him from the locals after he leaves the vessel.

The two Faeroese crewmembers represent a growing population of Faeroese who oppose the grind but are too afraid to express their unpatriotic views in public.

"These two are heroes who give us hope that we can stop the grind in the Faroe Islands. There is a new generation in the Faeroes who see the grind for what it is - a barbaric slaughter of cetaceans that has no place in the 21st century," said Captain Hall of Canada.

By midday on July 20, the Brigitte Bardot began its planned patrols of the southern most region of the Faeroe Islands in search of pilot whales.