In October, the Makah Tribe of Washington state and their plans to return to whale killing will be the subject of three public hearings to be held by the United States Federal Government.

The hearings are a part of the review process required in federal environmental law that are necessary for the preparation of an environmental impact statement being prepared by the National Marine Fisheries Service (NMFS). 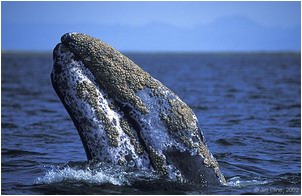 Since the Makah murdered a young whale in May, 1999, their whaling activities have been shut down by legal decisions of the 9th U.S. Circuit Court of Appeals. In the latest ruling from 2004, the Court ruled that the Makah must comply with the law and obtain a waiver from the NMFS before any further whaling can take place

The public meetings are scheduled for October 5th at the Makah Tribal Council Community Hall in Neah Bay, October 6th at the Vern Burton Memorial Community Center in Port Angeles, and October 11th at the Naval Reserve Building in South Lake Union Park in Seattle. All the meetings will start at 6:30 pm. NMFS is a branch of the National Oceanic and Atmospheric Administration (NOAA), an agency of the U.S. Commerce Department.

Sea Shepherd Conservation Society is urging citizens to attend these meetings to speak for the whales and to oppose the Makah proposal to kill whales at Neah Bay.

Sea Shepherd has 12 primary reasons for opposing the plan to slaughter whales by the Makah:

1. The International Whaling Commission (IWC) specifically allows aboriginal whaling only when there is an unbroken tradition and only for subsistence purposes. The whales must be a necessity for food. The Makah do not qualify because they voluntarily broke their tradition and they have no need for whale meat for food purposes. They argue that the need is cultural. This is not a recognized need by the IWC.

2. The Makah say they have a treaty right with the United States to slaughter whales. However, the USA effectively abrogated this treaty in 1946 when they joined the IWC and did not represent the Makah as they did the Yupik and other Alaskan native communities. The Makah have a legal right to sue the U.S. for not representing them, although they did not request representation at the time and have never made a protest about this lack of representation. Whaling is governed by international law and falls under the authority of the IWC, and therefore, the USA no longer has the legal right to grant permission to any peoples to slaughter whales within or outside the territory of the United States.

3. If the Makah establish a quota of gray whales they will seek to establish a quota for humpbacks, minkes, and orcas in the future because gray whale meat is not considered to be palatable as a food animal. Most of the whale meat that came from the killing of the young whale name "Yabis" (killed on May 17, 1997) was discarded and wasted. Initially, the Makah admitted to having this objective of seeking additional quotas.

5. If the Makah establish a quota for whales it will further strengthen the positions of Japan, Norway, and Iceland to escalate their illegal whaling activities and it will weaken the United States, as it has already done so, as an international voice for whale conservation.

7. There is no quota granted to the Makah by the IWC and there never was. There is a quota given to native communities in Siberia. The Makah and the United States traded bowhead quotas from Alaska with gray whale quotas from Siberia. This was a horse-trading deal outside of the IWC.

8. If a whale quota is established at Neah Bay, it will threaten the local populations of resident whales that will surely be targeted by the Makah unless specifically protected by legislation.

9. The resumption of whaling by the Makah will cause stress in the migratory and resident populations and this could lead to dangerous situations for whale-watching participants that could be exposed to wounded or stressed animals.

10. Sea Shepherd notes that there are many Makah opposed to the resumption of whaling, and the whaling initiatives have been advanced by elite Makah families without full democratic tribal participation.

11. Tradition and culture must not be the basis for slaughter. The ancestors of the Makah killed whales because they had to do so for survival. There is no survival necessity today to justify such killing.  The treaty that the Makah cite as evidence of their right to whale specifically states that they have the right to whale "in common with the people of the United States." When the treaty was signed, all Americans had the right to kill whales. When whaling was outlawed for all Americans it included the Makah as the rights are "in common" and not separate. There cannot be unequal rights granted in a system that promotes equality under the law. This is tantamount to extra special rights for a group of people based on race and/or culture and is contrary to the guarantee of equality under the law as guaranteed by the U.S. Constitution. 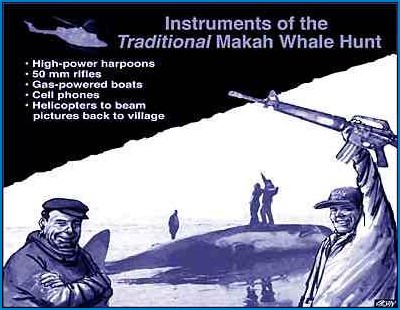 12. Whales should not be slaughtered anytime or anywhere by any people. These are socially complex, intelligent mammals whose numbers worldwide have been diminished severely.

Sea Shepherd is dedicated to the objective of ending the killing of all whales in all the world's oceans forever. In this effort, we speak for the whales as citizens of the Earth whose right to live and survive on this planet must be defended.