The Shark Angels are devastated by news of the recent tragedy on the M/V Shear Water, and their hearts go out to the family of Markus Groh, the scuba diver who died yesterday after an accident involving a bull shark in the Bahamas.  The Shark Angels are incredibly saddened by this unfortunate loss that hits very close to home and extend their sincere condolences to the family of the diver.  The Angels were recently hosted on the Shear Water, owned and operated by Jim Abernethy, the highly-esteemed pioneer of cageless shark diving in tropical waters.

The Shark Angels have a strong personal connection to and deep respect for Abernethy and the sharks of the Bahamas.

The Angels, a team of engaging, young conservationists - Kim McCoy, Executive Director of Sea Shepherd Conservation Society, Julie Andersen, Director of Shark Savers, and Alison Kock, Marine Biologist with Save Our Seas Foundation - recently joined forces with Rob Stewart, director of the award-winning documentary Sharkwater, to experience the Tiger Sharks of the Bahamas firsthand while filming the production ‘Shark Angels'.  The goal?  To shift the public's thinking about sharks and raise awareness of their desperate struggle to overcome extinction.

The Shark Angels and Stewart spent four days filming, surrounded by a dozen tiger sharks and countless lemon sharks, without cages.  The production team captured inspiring footage of three attractive and dynamic young women surrounded by dozens of supposed man-eaters inches away.  "Our experience was thrilling and completely contrary to what most people have been programmed to think about sharks.  They literally went out of their way to avoid causing us any harm," said Andersen.  "After hours in the water with hundreds of these magnificent predators, never did we feel threatened or scared.  Instead, we were filled with appreciation, wonder, and a deep sense of sadness, as sharks are being chased to the brink of extinction."

The Shark Angels acknowledge that, as with any other sport, there are inherent risks in diving with sharks.  These are closely managed risks and incidents between divers and sharks are infrequent, isolated events.  In fact, this death marks the first reported fatality resulting from an incident between a shark and a scuba diver during a commercially organized shark diving expedition.  During his 35 years of diving with sharks, Abernethy has maintained a spotless safety record until this point, bringing tens of thousands of divers into the water to safely experience shark interactions. Abernethy is a responsible, safe dive operator who has spent more time in the water than anyone with the sharks of the Bahamas. He delights in safely sharing his passion and respect for these sharks with others.

While the fear surrounding shark bites abounds, in reality, only one person died from a shark bite last year worldwide.

In contrast, sharks are one of the most hunted animals on the planet.  Desired for their fins, over 100 million sharks are killed each year with a growing number of shark species approaching extinction.  "Sharks have inhabited our planet for 450 million years, since before the time of dinosaurs.  We must help people understand the vital role sharks play in ecosystems and the impact their extinction would have on all species, including humans," said McCoy.

The Shark Angels are heartbroken over the recent incident but remind the public that accidents such as these are very rare.  "Many sports and hobbies whether it be mountain climbing, horseback riding, skiing, or diving with sharks carry inherent risks, of which every enthusiast is aware, but we cannot let fear govern our lives and prevent us from pursuing the things that make us happy," remarked Kock.  It is far more dangerous ride a bike or drive a car, and in 2007, deaths due to these activities in the U.S. alone exponentially exceeded deaths from shark bites worldwide.

"It would truly be unfortunate if this incident was manipulated into another misguided attempt to present sharks as mindless killing machines at a time when shark populations are being wiped out", said Stewart. "This is a tragic and highly unusual accident. We need to abandon our deeply-rooted fears and unite people around the truth - an enlightened view of sharks." 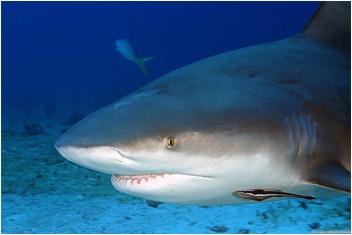