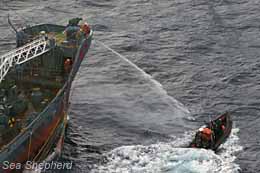 American crewmember Brian Race, (25) from New York, was jabbed twice in the face with a bamboo pole receiving lacerations above his right eye and on his nose.

Russell Bergh of South Africa, (35) a cameraman for Animal Planet, was struck in the right arm and shoulder with an iron grappling hook thrown from the harpoon vessel resulting in deep bruising.

Photographer Guillaume Collet of France, (27) was also struck in the right arm and shoulder by an iron grappling hook resulting in deep bruising.

There were no injuries incurred by any of the crew on the Japanese vessel.

“We are almost at the limit of the eastern boundary of their self assigned hunting area,” said Captain Watson. “We should be getting close.”