Three vessels from Japan's fleet on Monday docked in Shimonoseki, a port town about 800 kilometres south-west of Tokyo, with the mother ship due in Tuesday, according to the agency. Two other ships returned to Japan last week.

Kazuo Yamamura, president of Kyodo Senpaku Kaisha, which operates the whaling fleet, on Monday told reporters he was upset by damage allegedly caused to his ships by Sea Shepherd.

"I'm enraged, and my blood is boiling with anger," he said.

The company has blamed Sea Shepherd for skirmishes at sea, saying it was the protesters who escalated the attacks by ramming two Japanese vessels and pelting whalers with bottles filled with rancid butter.

"We did not ram any whaling ship," said Captain Watson. "We blocked their loading operations and when they attempted to get by us, the harpoon vessels caused the collisions. The harpoon killer vessels are faster and more maneuverable than the Steve Irwin. To suggest that we rammed them is absurd. Three different collisions happened when they attempted to pass us to offload their whales. 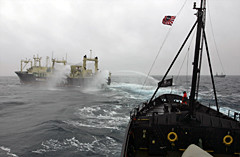 This year, Sea Shepherd's boat chased the fleet more than 3200 kilometres through the icy waters of the Antarctic Ocean before withdrawing in February.

Sea Shepherd's Operation Musashi has been a success. "We did the very best we could with the resources available to us," said Captain Watson. "If we can raise the funds for a second faster vessel we will be able to do even better next season."

The entire campaign was documented by Animal Planet for their hit show Whale Wars. The second season, which documented Operation Musashi, is set to air in the United States on June 5th at 9 PM on Animal Planet.

"Every whale saved is a victory and 305 whales saved is a major victory, plus costing the whalers their profits for the season is an incredible victory," said Sea Shepherd 1st Officer Peter Hammarstedt of Sweden.

Sea Shepherd In the News: