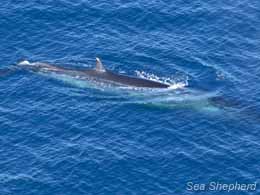 A Minke Whale swims freely, as it should, in the Southern Ocean Whale Sanctuary. Photo: Billy DangerIt has been a long and difficult campaign and although handicapped by the temporary loss of the scout vessel the Brigitte Bardot, the Steve Irwin and the Bob Barker were able to chase the Japanese whaling fleet for more than 17,000 miles, giving them little time to kill whales. In addition, two of the three harpoon vessels spent more time tailing the two Sea Shepherd ships than killing whales.

“The kill figures will not be released by Japan until April, but in my opinion they will not get over 50% for certain and my prediction is it will not be above 30%. Not as good as last season, but much better than all the previous years.”  Said Captain Paul Watson. “It has been a successful campaign. There are hundreds of whales swimming free in the Southern Ocean Whale Sanctuary that would now be dead if we had not been down there for the last three months. That makes us very happy indeed."

The Bob Barker will return to Hobart, Tasmania, the Brigitte Bardot is completing repairs in Fremantle, and the Steve Irwin is now berthed in Williamstown.

“If the Japanese whalers return, Sea Shepherd will return. We are committed to the defense of the Southern Ocean Whale Sanctuary.” Said Captain Paul Watson. “No matter how long it takes, no matter how risky or expensive. The word “sanctuary” actually means something to us and that something is worth fighting for.” 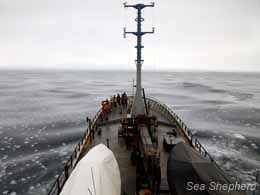