The War for the Whales Erupts in Indonesia

We need to delay and prolong the repairs of the Yushin Maru #2 for as long as possible. Sea Shepherd has offered a $10 thousand dollar reward for anyone who can non-violently prevent the ship from departing the harbour for the duration of this year's whaling season.

The longer we can keep the Yushin Maru #2 away from the Southern Ocean Whale Sanctuary, the greater the impact on whaling profits and kill figures. The rest of the whaling fleet is operating on the far Eastern side of the hunting area halfway between New Zealand and Chile.

The Sea Shepherd ship Steve Irwin will arrive in Hobart on January 17th to refuel, before returning to pursue and harass the whalers into the month of March.

"We have demonstrated that the whalers can by physically stopped," said Captain Paul Watson. "If we had just one more ship down here, we could stop them by 90% and we could bankrupt them totally. Shutting down illegal whaling in the Southern Ocean Whale Sanctuary is a very doable task. We are doing the best we can with the resources available to us. With more support we could win this war to save the whales."

The Sea Shepherd Conservation Society has been granted continued access to Australian ports despite demands by the Japanese government that the Steve Irwin not be allowed to refuel in Australia. Unlike the whaling fleet, the Sea Shepherd ships have not been charged with any crime so there is no just cause for banning the Steve Irwin. The whaling fleet on the other hand is barred from Australian and New Zealand ports. We are now working to have them banned from ports in Indonesia because of their illegal whaling activities in the Southern Ocean Whale Sanctuary. 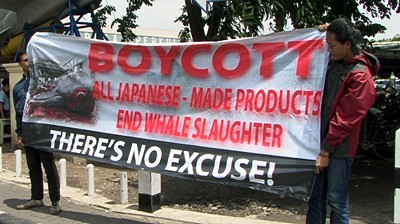