Once again the criminal whaling nations of Japan, Norway, and Iceland have blatantly flaunted their contempt for international conservation law by smuggling illegally slaughtered whales to Japan.

The BBC has confirmed that sixty tons of endangered Fin whale meat killed in 2006 has been illegally shipped to Japan along with a smaller shipment of Piked whale meat from Norway.

The Fin whale is listed as Endangered on the international Red List of Threatened and Endangered Species.

This is Iceland's first whale meat export to Japan in nearly 20 years.

The global trade in whale meat is also prohibited under the Convention on International Trade in Endangered Species (CITES).

This trade will be mutually beneficial for the three main whaling countries," said Kristjan Loftsson, CEO of the Icelandic company Hvalurhf which kills fin whales.

"This trade is perfectly legal under the domestic legislation of the three countries as well as all relevant international law."

Iceland's Fisheries Ministry said it was not an issue that concerned the government.

"It's been clear since 2006 that our position was that those who were engaged in [the hunt] could export the products," said Stefan Asmundsson, a senior official in the ministry and Iceland's commissioner to the IWC. "Then it's up to them to do that; and as far as I know they have shipped some product to Japan," he informed the BBC News.

An official in Norway's Directorate of Nature Management confirmed that his government had issued export permits for Piked whale meat totaling 5.3 tonnes to two companies.

A spokesman for one of the companies, Myklebust Trading, said the consignment - sent by air - had reached Japan.

However, an official in Japan's Fisheries Agency told BBC News that no request for permission to import the meat had been lodged with the government - and such a request was needed, he said.

So in addition to violating international conservation law, it appears that the smugglers also violated Japanese import regulations.

"Norway and Iceland should be disciplined with trade embargos for their criminal activities," said Captain Paul Watson. "Of course they won't be because there is an overall lack of enthusiasm for the enforcement of conservation law on the part of nations. But if the law is not enforced by governments then I hope that passionate and determined individuals will step up to the plate to deliver justice for the whales, after all the U.N. World Charter for Nature does allow for the enforcement of conservation law by non-governmental organizations and individuals."

The Sea Shepherd Conservation Society has been actively intervening and disrupting whaling activities by Japan, Norway and Iceland since 1986, the year that the global moratorium on commercial whaling came into effect. 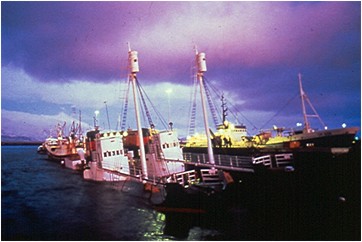 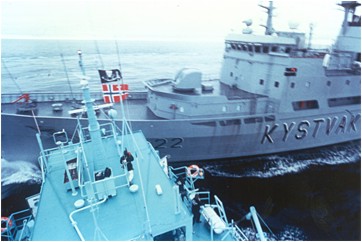 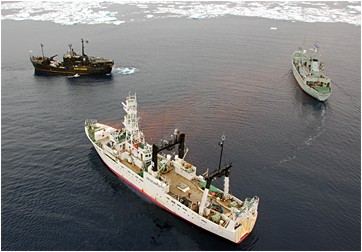 2007: Sea Shepherd ships the Farley Mowat and the Robert Hunter shut down the illegal Japanese whaling vessel the Kaiko Maru.