The Tar Baby Farley Gets Stickier

The Tar Baby Farley Gets Stickier 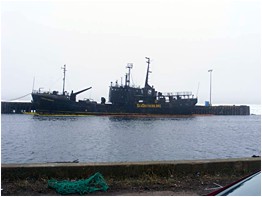 Now the government wants the Sea Shepherd Conservation Society to pay a ransom to get the ship back. They want us to pay $50,000 for the vessel.

Sea Shepherd has refused. Sea Shepherd wants the ship back but only in the condition it was received with damages paid, the charges against the officers dropped and an apology from Loyola Hearn for his act of piracy.

The Sea Shepherd Conservation Society has been able to hold the reins of this story since the beginning with the Ministry of Fisheries doing pretty much everything we predicted they would do. The Society believes the evidence will result in a win for the defense. The campaign has been an amazing success thanks to over-reaction by the Fisheries Minister. We have raised the profile of the seal slaughter to an international audience and especially in Europe where a bill is before the European Parliament to ban seal products.
"This glorified welfare project is on the ropes," said Captain Paul Watson. "These seal killing bums will have to go looking for a real job soon, one that does not involve the sadistic and brutal torture and slaughter of new-born defenseless animals. This obscenity survives only because the government of Canada forks over the dough to keep the sealers happy and to keep their minds off the fact that the incompetence of the Department of Fisheries and Oceans destroyed the commercial fishing industry."

Below is a copy of the article from the Globe and Mail from Saturday May 10, 2008 Globe and Mail; http://www.theglobeandmail.com/servlet/story/LAC.20080510.FARLEY10/TPStory/National

SYDNEY, N.S. -- Canadian taxpayers are on the hook for the cost of keeping an anti-sealing vessel docked at an industrial park wharf near Sydney, N.S.

The 54-metre Farley Mowat, owned by the Sea Shepherd Conservation Society, was detained off the coast of Cape Breton on April 12 by the federal Department of Fisheries and Oceans.

It charged the vessel's captain and first mate with interfering in the annual seal hunt in the Gulf of St. Lawrence.

During a Provincial Court hearing yesterday in Sydney, Judge Peter Ross turned down a Crown application to release the vessel to Captain Alex Cornelissen, 40, of Amsterdam, and first mate Peter Hammerstedt, 23, of Stockholm, provided they post a $50,000 bond.

Crown lawyer Theresa O'Leary argued the Crown would return the vessel to those from whom it was seized, meaning the captain and the first mate.

But lawyer Guy LaFosse, who represents the two accused, said the Crown has failed to produce any evidence proving that the vessel had been seized and from whom.

He also said neither of his clients own the property nor are they in any position to assume control over the ship.

In his decision, Judge Ross concurred with Mr. LaFosse that the Crown application seemed to amount to asking that a remedy to be imposed on a party not seeking a remedy.

"This may be imposing some kind of liability on them when they are not even asking for it," the judge said in rejecting the Crown's application.

The vessel and its 17-member crew were brought to Sydney where Capt. Cornelissen and Mr. Hammerstedt spent 24 hours in jail.

They were released on $10,000 bail and deported, but are scheduled to return to court July 2 to enter pleas to the charges.

The vessel is being held at the Sydney Industrial Park at taxpayers' expense.

The society can make application itself to have the vessel returned, but has not done so.

Sea Shepherd spokesman Paul Watson said earlier this week he plans to submit a bill every month to the federal government for as long they retain control over the ship.

Mr. Watson said the society will bill $1,000 per day for every day the vessel is held.

The society is also demanding an apology from federal Fisheries Minister Loyola Hearn.