The Slaughter has Begun in the Ferocious Isles 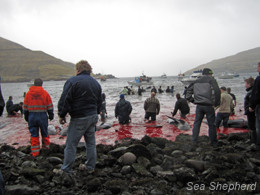 Sea Shepherd has gone to the Faeroes in the past, but this time we return stronger, better equipped, and more experienced than ever and we are returning with a technology that will serve the whales well this summer. In the meantime, until our ships can reach the bloody drenched shores of the Ferocious Isles, the butchers will have free reign to torment and inflict a vicious slaughter to entire families of gentle, wondrous cetaceans.

There are gentle and intelligent people in the Faeroe Islands who have had to stomach the shame of this slaughter for years, who have been afraid to speak out because of the bullying nature of the cowards who torture and kill the whales. It’s time to confront these cowards and it is time to return to the obscenely bloody beaches of the Faeroes to confront these thugs who delight in boasting about how “God” gave them the “grind” or the “right to wallow in the blood and gore of the whales, to rip the fetuses from the bodies of their mothers and to stress, slash, stab, and club these magnificent gentle creatures to death. They call their killing a “gift from God.”

The only problem is that the only God that would condone such horror is Satan and the Faeroes seem to serve their evil God with all the murderous devotion of cultists who have set aside common decency and mercy in the name of a barbarous tradition that has no place in the 21st Century, no place in civilized society and certainly no place in the European Union.