The Search for the Berserk Continues

The Sea Shepherd helicopter with pilot Chris Aultman logged 21 hours in the air for this search. Sea Shepherd very much appreciates that the McMurdo base assisted us with helicopter fuel to allow for an extended range for the search. The Steve Irwin searched in a grid pattern covering the entire area of McMurdo Sound. The Steve Irwin also deployed a small boat crew to search areas where the larger ship could not venture. 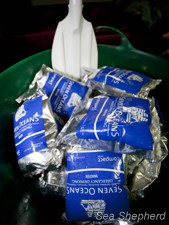 Emergency drinking water and paddle are recovered by Sea Shepherd.
Photo: Barbara VeigaThe Sea Shepherd crew was pleased that weather and sea conditions were absolutely perfect for a search. “Finding a small blue, mostly submerged water packet in such a large area demonstrates just how careful our search has been,” said Steve Irwin sailing master Malcolm Holland from Australia. “If there was anything to be found, we found it.”

Sea Shepherd discovered that the EPIRB (emergency beacon) was inside the vessel. It was designed to issue a distress signal for 24 hours but only transmitted for 45 minutes. It was designed to transmit from a depth of 10 meters and be manually activated. The device was not found. This could mean the device was activated from inside a sinking vessel and stopped transmitting after the vessel sank beneath 10 meters of water. This evidence suggests that the Berserk sank at the position where the distress signal was issued, and that it sank rapidly without the possibility for the crew to escape. The combination of heavy seas, 155-kilometer winds, negative 50 degree Celsius temperatures, deadly ice growlers, and a steel hulled vessel all contributed to this tragedy.

“These were brave men, experienced men, but the odds against them were staggering in the full face of nature’s fury,” said Captain Watson. “They were, however, here in the true spirit of Amundsen, they knew the risks and they chose to take them, and thus all three were masters of their own fate and captains of their own souls.”

The Sea Shepherd Conservation Society has been honored to participate in this historic search, but we regret that the outcome has not been a happy one.

Captain Watson issued a statement saying, “I do want to thank my crew, especially my sailing master Malcolm Holland from Australia for directing the search operations, Helicopter pilot Chris Aultman of the United States for spending 21 hours searching the area by air, Cassandra Smith from Australia for spotting the life raft, watch officers Nuño Ramos Fernandez of Spain and Luis Correia De Pinho of Australia for their vigilance, Security Officer Jeffrey Milstein of the United States for his rescue operational experience, and photographer Bárbara Veiga of Brazil for documenting the evidence. Thanks also to the rest of my crew for working long hours and their efforts. And a special thank you to New Zealand Search and Rescue for coordinating this effort so efficiently from so far away.”

Search details:
Time the search began: 0700 hours (NZT), February 24th
Total time of land and sea search by the Steve Irwin: 52 Hours up until 1100 hours February 26th
Helicopter hours flown: 21 hours total, average of 2.4 hours per flight
Distance flown: 1550 nautical miles at an average of 80 knots.
Square miles searched: 3600 nautical miles.
Search area details:
From the discovery of the life raft lost by the HMNZS Wellington, to Cape Bird, along the coast to Tryggve Point, and back. Then all of McMurdo Sound from Backyard Bay and Inaccessible, north to Cape Bird, including off the coast from Cape Royds to Cape Bird. Then all the way from Cape Bird to Geiki Bay in excellent search conditions – searching a wide band along the ice edge. From there, due east 20 nautical miles and south back to the vessel. Then a corridor flight parallel to the Steve Irwin in an area west of Beaufort Island where the life raft was discovered, and northward a further 40 nautical miles. Then a search from the point where the Berserk lifeboat was discovered and northward a further 40 nautical miles. The helicopter then searched a track between the lifeboat position and Bird Point. Debris from the lifeboat was found near Horseshoe Bay. The helicopter did a transit near Franklin Island and searched the shallow waters around the island. Finally a northward run up to the 166 E Longitude line near the Ross Sea western shore.