The Seal Slaughter is Cruel According to Canadian Sealers

What is presented below is testimony by Canadian sealers directly to the Department of Fisheries and Oceans. This testimony proves that the DFO is knowingly covering up the truth of the inhumane methods used by the sealers. They are willfully lying to the Canadian public and this cover-up is a major ethical scandal that all Canadian elected politicians and Senators save only one are accomplices to.

In their presentations to the European Parliament to convince Europeans that the slaughter is humane, we can be certain that the testimony of these sealers will not be included.

The annual Canadian seal slaughter is the most vicious act of barbarism perpetuated on any wild animal population in the world and the testimony of the men who torture and kill them backs this accusation up.

CANADIAN SEALERS TESTIMONY - OBTAINED UNDER THE FREEDOM OF INFORMATION ACT:

The following is direct testimony from sealers, taken by Department of Fisheries and Oceans staff. It was obtained through Access to Information laws, and contains graphic descriptions of animal cruelty. To date, seven charges have been laid as a result of the investigation, but only one had resulted in a court hearing.

"Prior to March most females were killed with the pup inside them. I seen seven pups threw over the side after the female was pelted. I took two out myself. Me and another sealer even agreed that this was shocking and there should be another way to hunt seals. We were in the whelping on March 10/98 because I observed that eight of tens pans of ice had young pups with the after birth and other debris from the birth on the ice. There was once I can remember the young seal watching his parents being hoist aboard. He watched the boat as we steamed away. The pups were not killed but left by themselves on the ice."
- Sealer's statement, taken by Fergus Foley, Department of Fisheries and Oceans

"I did see some mother seals killed and the pup fall out on deck still alive. (Deleted) told me to throw it overboard and I did. It crawled up on a pan of ice. The mother was full of milk, the milk ran out on deck when the pup fell out."
- Sealer's statement, taken by Cyril Furlong, Department of Fisheries and Oceans 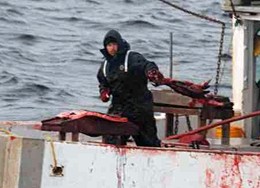 "I was present when female seals were pelted and did see pups fall out of the female on deck. I seen this happen twice and know that it happened eight to ten times during the first trip. I knew this happened because of conversations with the crew. The two pups that I saw on deck were alive. The pups were threw over board and on one occasion I did see one of these pups swimming in the water. I don't know what happened to the pups."
- Sealer's statement, taken by Cyril Furlong, Department of Fisheries and Oceans

"I seen a female being pelted and the pup came out of her when they cut her open, the pup was dead. This seal was killed for a while. This was on the day we got one hundred and seventy. Someone passed the comment, 'If Green peace were only here to see this.'"
- Sealer's statement, taken by Fergus Foley, Department of Fisheries and Oceans

This last statement also shows how ignorant the sealers are about the groups opposing them. Greenpeace has not opposed the slaughter for years.