The Seal Hunt is Dead! Long Live the Seals!

Canada, Greenland and Namibia account for around 60 percent of the 900,000 seals hunted each year.

According to the Guardian newspaper, the Norwegian Foreign Minister Jonas Gahr Stoere wrote to EU trade Commissioner Catherine Ashton this month arguing that the ban broke the principle of free trade and set a dangerous precedent on the harvesting of renewable resources.

A European official said the Commission believed the plan was "legally sound".

The 15 seal species now hunted are not endangered but European politicians demanded action after finding what they said was evidence that many are skinned while still conscious. The animals are usually first shot or bludgeoned over the head with a spiked club known as a hakapik.

The Sea Shepherd ship Farley Mowat was seized by the Canadian government in an act of piracy in April 2008 and was auctioned off with secret bids this month without the ship ever having been arrested, charged with any offence, without a court hearing, without a summons and without due process of law.

Apparently the ship was auctioned off on April 21st, but the government has not released any information on who the ship will be given to. Sea Shepherd intends to take legal action against the buyer on the grounds that the Farley Mowat is the property of the Sea Shepherd Conservation Society and was never legally forfeited.

Sea Shepherd officers Captain Alex Cornelissen and 1st Officer Peter Hammarstedt were charged with the "crime" of breaking the Seal Protection Regulations by documenting and witnessing the killing of seal pups.

They are scheduled to appear in court on April 27th but Canadian Immigration officials ordered them deported last April and informed them they are inadmissible to re-enter Canada.

"This is very convenient," said Captain Paul Watson. "Canada will be able to seize $10,000 in bail money and will avoid the embarrassment of the trial and they will accuse our crew of refusing to appear. But they can't appear in court in Canada if they are not allowed to enter Canada."

However despite the hassles and the loss of a ship that the Society was going to retire anyway, the publicity generated by last year's campaign to oppose the sealers helped in convincing the European Parliament to ban seal products and thus the trade-off was well worth the expense and the inconvenience.

"Sometimes you have to lose the battle to win the war," Said Captain Watson

Meanwhile Canadian politicians are spouting threats and whining like cowardly Nazi's in a bunker as the waves of civilized reform crashes down on the barbaric mindset that has for so long endorsed and applauded the grossly inhumane and savage slaughter of one of the most innocent creatures on the planet - the baby seals.

"These cruel and sadistic baby killers have had their day," Said Captain Watson. "The price of seal pelts has fallen to their lowest levels and soon this obscene industry will go the way of the slave trade, cock-fighting, bear-baiting, and child labour - in short it will go extinct and all of us who have fought our entire lives for this great victory will be grateful for the European nations for realizing this wonderful dream. The seal hunt is dead - long live the seals" 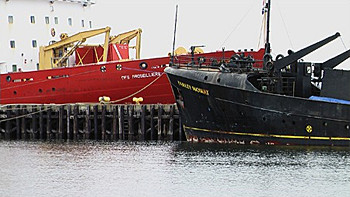