The Sea Shepherd Conservation Society is offering a prize of USD$10,000 to the person or persons who can best document the annual slaughter of dolphins and small cetaceans in Taiji, Japan.

In offering the prize, Captain Paul Watson explained the reasons for this bizarre contest.

"This is a distasteful and unpleasant task, but it must be undertaken. The authorities and the fishing community of Taiji have made it very difficult for Sea Shepherd crew to document the dolphin drive and slaughter. What is needed is some motivation for Japanese people and documentarians to intervene and a $10,000 prize is certainly motivation. The Sea Shepherd Conservation Society will pay the prize to whomever delivers the most graphic and damning images of the killing of dolphins and small cetaceans by Taiji fishermen.  The challenge is open to anyone, and the winner must allow the Sea Shepherd Conservation Society to utilize the images for the purpose of further exposing the annual dolphin and small cetacean slaughter."

The prize is open to people utilizing the media of video film or digital images. The dolphin killing season officially begins on October 1st.  Every year thousands of dolphins and other small cetaceans are driven into the bay or netted at sea. They are drowned in nets, clubbed, knifed and stabbed with spears repeatedly until the sea runs bright red with blood.

In addition, two Sea Shepherd crew, Allison Lance Watson of the United States and Alex Cornelissen of The Netherlands, cut the nets and freed fifteen dolphins before the fishermen were able to slaughter them. They each served 23 days in jail for this act of compassion, and both felt it was a rewarding experience.

"What is three weeks in jail compared to the rest of a lifetime for fifteen dolphins?" asked Allison Lance Watson.

Captain Paul Watson made the announcement of the $10,000 prize from onboard the conservation research vessel Farley Mowat presently on patrol off the coast of Amazonia, Brazil, in search of illegal longlines.

"We cannot allow the Japanese to continue to cover-up this atrocity against the dolphins. Japan seems to believe that by censoring the truth, the cruel and bloody slaughter of intelligent, defenseless dolphins and small cetaceans will be their own dirty little secret. We intend to continue to find ways of exposing the dolphin kill and the association of the captivity industry with the slaughter," said Captain Paul Watson.

One of the motivations for this slaughter is to round-up dolphins for sale to the captivity industry. The buyers from marine dolphinarium around the world chose a few prime animals from each drive and paid good money for them. The rejected members of the pod are then slaughtered by fishermen who view dolphins as bandits and accuse them of eating fish that, according to the fishermen, belong to the fishermen.

After the dolphins are slaughtered, they are butchered for sale to restaurants and markets despite the extremely high mercury and other heavy metal contaminants in the flesh.

To apply for the prize, images must be sent to the Sea Shepherd Conservation Society. The Society will pay $10,000 for the best images based on quality and graphic documentation. Images from non-winning entries may be eligible for purchase by the Society for $500 per minute for video footage or $250 per photograph. The images must be taken between October 1, 2004 and March 31, 2005. 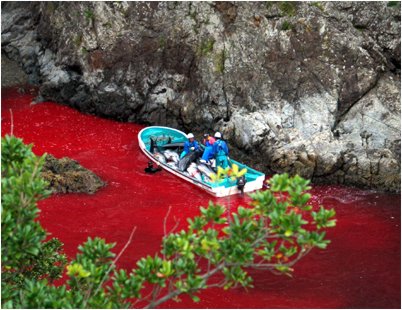 
For more information about the Taiji issue or for addresses to write protest letters to, please visit our Taiji Campaign page at http://www.seashepherd.org/taiji/.