The Sad Plight of Sea Turtles on Tobago

THE SAD PLIGHT OF SEA TURTLES ON TOBAGO

Report from the Island of Tobago from Matt Kelly

(Matt Kelly was a Sea Shepherd crewmember onboard the R/V Farley Mowat for the Antarctic campaign to protect whales in December 2002 and January 2003.) 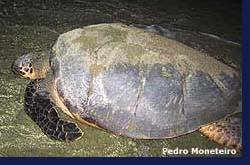 The sunny tropical island of Tobago lies in the far Southeast of the Caribbean.

It is politically connected to it's sister isle of Trinidad, which joins the two islands as The Republic of Trinidad and Tobago (T&T).

Tobago is known for it's eco-atmosphere, and relies on tourism as the mainstay of its economy.

On October 13, 2003, Tobago was selected by the World Travel Awards in New York City as being "Home to the Best Eco-Destination in the World." On November 13, 2003, Tobago was selected by the Caribbean Travel Awards Committee in London as "The #1 Eco-Destination in the Caribbean." These awards are great news for Tobago's economy, and I hope Tobago enjoys a great boon from these distinctions. But if Tobago is to enjoy this reputation, it must be a good steward of its natural assets, and not let them be exploited.

Only one day after learning about Tobago's distinctive and prestigious award in London as the best ECO Island, my wife and I witnessed a very disturbing, blatantly negative and anti-environmental incident on this very same island. Unfortunately this was not an isolated incident.

We are frequent visitors to Tobago, and we have an interest in the environment. On Sunday, November 23rd, 2003, we joined in a beach clean up at Kilgwyn Beach on Tobago, sponsored by "ET" (Environment Tobago). ET is an independent environmental-oriented NGO, which has done wonders with all of their hard work in working for the animals, nature and environmental protection of Tobago.

Right before the eyes of our group, some "fisherman" landed their boat, and took out a furiously struggling endangered Green Sea Turtle. They had caught the hapless creature in a net stretched across the well-known beds of ancestral feeding grounds of endangered sea turtles. The "fisherman" announced they were planning to eat the turtle, (and they were certainly not poor or starving). One member in our group offered to buy the turtle from the fishermen, to set it free, but to no avail.

Also, two Game Wardens were present in our group vested with full authority to handle wildlife violations. They were angered and distraught to see this turtle taken, but said they were helpless to stop the situation, because of a loophole in the Wildlife Laws of Trinidad and Tobago. Therefore, this allows the interpretation that male sea turtles may be taken in the "open" season (October 1st through March 31st). This major flaw is well known by the turtle hunters. After a turtle has been butchered (at sea, or out of sight), it is quite impossible to discern male from female.

In looking into this situation even more, I find that Kilgwyn Beach has been a regular slaughterhouse for both Green and Hawksbill Sea Turtles. Local people have told me they can come to Kilgwyn Beach and commonly find the fresh remains of possibly dozens of sea turtles. I have heard that the nets these "fishermen" use here can catch up to 20 turtles at one time.

In addition to this shocking situation, Tobago is also the home nesting base for the Leatherback Sea Turtle, which is regularly slaughtered here. Horror stories abound for the plight of the innocent female Leatherbacks who make it back to their traditional nesting beaches on Tobago (see links below).

T&T is a signatory nation to several international treaties concerning the conservation of endangered species, and also in regards to maintaining a healthy marine environment. CITIES and The Cartagena Convention (Protection & Development of the Marine Environment of the Wider Caribbean Region) are among these international environmental agreements. It is time for T&T to live up to their promises.

Tobago's courageous and indigenous sea turtle protection NGO, "S.O.S." (Save Our Sea Turtles) notes that from 2000 to 2002, they buried the mutilated and butchered carcasses of an estimated 15% of the entire nesting population of the Leatherbacks for that time period in the Black Rock area. Dedicated people to patrol the island are in short supply, and enforcement and convictions of turtle protection laws are weak, rare, and often non-existent. S.O.S. could use a LOT of help.

The Green, Hawksbill and Leatherback Turtle, as well as ALL sea turtles are listed as endangered species worldwide. The populations of ALL sea turtles worldwide is critical. The National Geographic News Services reported last March that the population of the Leatherback Sea Turtle has plummeted over 95% in just the past 22 years alone. Tobago has developed a negative reputation in the international environmental community for lax protection of sea turtles, and has been the target of environmental campaigns from organizations such as Sea Shepherd Conservation Society. When I looked around Kilgwyn Beach I personally saw the chopped and burned parts of possibly dozens of endangered sea turtles.

I am asking you to come to the aid of the hapless and endangered sea turtles of Tobago. Please take a moment to write to the key government officers and local news media who can make a difference. Ask the government of T&T, and anyone involved in the promulgation and enforcement of its laws to make the taking AND POSSESSION of any sea turtle, at any time (including any/all body parts), at ANY TIME OF THE YEAR be a crime. And ask that there be SERIOUS ENFORCEMENT of these laws. Letters to the editor are also a major help for the turtles. Please write. And please help Tobago's
NGO's , "ET", and especially "S.O.S.". Can anyone volunteer to patrol with S.O.S. during the turtle egg-laying season (March - June)?

Progressive nations around the globe have strict laws in place regarding the taking, and especially the possession of endangered species. If Tobago is truly to be known as an ECO-Island, there must be some quick and serious revision in this Island's wildlife laws. Tobago's economy is totally dependant on tourism. A negative reputation with endangered sea turtles could have very serious repercussions on the future of Tobago's economic mainstay. The future of sea turtles now hangs in the balance. There will come a day, in the not too distant future, when this "Eco- Island's" environmental role will be assessed as making, or breaking the fragile status of the majestic sea turtle.


GOVERNMENT CONTACTS FOR TRINIDAD & TOBAGO:
[Your snail mail letters are most effective.]

The Honorable Hughford McKenna
Secretary for Agriculture, Marine Affairs and the Environment
Tobago House of Assembly
Division of Agriculture
Botanic Station
Scarborough, Tobago
Republic of Trinidad & Tobago
[Tel. 868-639-1966]
(Under the jurisdiction of the Secretary of
Agriculture comes the enforcement of all
wildlife laws and regulations on Tobago)

[Email letters are OK with the press. Public letters to the editor cause a lot of pressure. When writing, always be sure to give your name and address. This adds legitimacy to your letter. Most publications anywhere will not print anonymous letters. An asterisk(*) means the paper has the best impact.]

PLEASE HELP THESE ORGANIZATIONS IN ANY WAY YOU CAN!!!

LINKS TO THE PLIGHT OF TOBAGO'S SEA TURTLES:

I hope you can spare a just few minutes for the turtles. This is really important. Please join in your voice for this important push to help endangered Sea Turtles survive.

For the turtles,
Sincerely,