The Return of the Walls of Death

The Return of the Walls of Death

From 1987 to 1992, Sea Shepherd Conservation Society concentrated efforts on opposing the deadly driftnet fleets that were strip-mining the world's oceans of life.

It was a five-year battle that ended with a declaration by the United Nations that outlawed the use of driftnets.

Now 14 years later, the driftnetters are returning. They are still illegal, but there is such a scarcity of fish in our oceans that illegal fisheries are escalating and they are increasingly utilizing illegal gear like driftnets.

From left: Piles of driftnet waiting to be loaded onto a driftnetting vessel. A sea bird is caught in
a net and dies because of this destructive fishing method. This victim is called "by-catch."

The long-range patrol planes counted 25 vessels equipped with driftnet gear, 12 of which had their nets in the water.

The vessels appear to be registered in South Korea and Taiwan. They are targeting squid and salmon. The by-catch of other species including turtles, birds, and non-targeted fish is considerable with these deadly monofilament nets.

Sea Shepherd is considering planning another campaign to intercept these high seas pirates and to seize their illegal nets.

Between 1987 and 2006, Sea Shepherd crew seized and destroyed hundreds of miles of illegal driftnets in the North Pacific and the Caribbean Sea.

"The North Pacific Ocean area has been placed on our watch list," said Captain Paul Watson. "The next time we travel to the Northern Pacific we will be on the lookout for these criminals and we will once again seize and destroy their illegal gear."

1987: The voyage of the Sea Shepherd ship Divine Wind from Seattle along the entire Aleutian chain to investigate driftnet fleets and to collect ghost nets from the beaches of the islands. 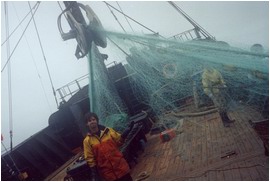 1991: The voyage of the Sea Shepherd II to oppose driftnet fishing in the Caribbean. The Sea Shepherd II rammed a Taiwanese driftnetter and worked in cooperation with the Trinidad and Tobago Coast Guard to expose the connections between illegal fisheries and corrupt government bureaucrats.

1992: The voyage of the Sea Shepherd II and the Edward Abbey to oppose driftnet fishing in the North Pacific. Two Japanese driftnet vessels were rammed and their nets seized and destroyed. The official Japanese position on the incident is that it did not happen despite the fact that Sea Shepherd videotaped the entire encounter.