The Perils and Pleasures of Pitcairn Island

The Perils and Pleasures of Pitcairn Island

Report from Captain Paul Watson onboard the Farley Mowat

There is nothing that can make one appreciate the remainder of the day more than having cheated death and dismemberment in the morning.

Today was such a day. It began early enough with the sighting of the high peak of Pitcairn Island at 0530 Hours. We dropped anchor at Bounty Bay at 0700 hours but had to weigh anchor again at 0800 when we found that we could not hold the bottom.

First Officer Alex Cornelissen took the ship a mile off to drift while I took a shore party to the island to clear immigration.

Bosun's Mate Colin Miller of Canada readied the boat and chose Ryan Rittenhouse of the U.S. to assist him. Also in the boat, aside from my self were photographer and biologist Gunter Schwabenland and 2nd Cook Roberta Kleber, both from Brazil; Quarter Master Lisa Moises of Germany; 2nd Engineer Willie Houtman of New Zealand; and James Pacheco of the U.S.

The 8 of us headed in and I took the control of the Zodiac inflatable to bring it into the small dock area on the island. To say it looked ominous is an understatement. There was thunderously heavy surf breaking into the entrance of the tiny harbor. The pounding of the surf on the beach cracked across the water. 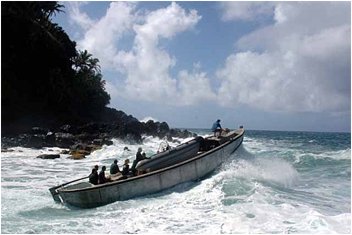 I could see an islander on the end of the dock pointing out our approach so I angled the Zodiac and shot forward with the intention of racing ahead of the breaker and quickly darting into the relative calm behind the short seawall.

That was the plan, and it was dependent on timing and the nerve to dash behind a roller and follow it in, not too close, but close enough to give some time to stay in front of a following sea.

I hit the throttle and the inflatable dashed forward but a side swell came up deflected off the seawall and the Zodiac hit and rode over the top. Unfortunately, Ryan Rittenhouse sitting in the bow was tossed over the side as he was filming the surf with his video camera. He grabbed the safety rope with one hand and raised his camera to James Pacheco to grab as he hung shoulder deep in the white water on the forward port side.

Unfortunately, his weight turned the Zodiac and slowed us down. I saw Ryan look behind and yell, "There's a big one coming."

I looked behind and knew instantly that we were in trouble. The incoming wave rolling menacingly towards us, rose fearfully high. I saw the curl forming and with Ryan over the side we did not have the speed to avoid the inevitable.

I felt the water pulse upward from behind and beneath as we were rapidly propelled forward on the face of the wave at breath-taking speed. I could not turn to race into the harbor without giving the wave a broadside which would surely capsize us and throw us all into the water. Instead, I fought to keep the boat straight as we surfed abruptly forward. I saw that Ryan somehow managed to get himself back into the boat just as we dove downward and plowed into the foam, filling the entire boat with water as the surf dashed us forward and onto the boulders in front of us.

As we struck the vessel slid sideways and our port side slammed into the rocks where Ryan had been hanging over the side. If he had not gotten back into the boat, it could have been fatal.

For a split second, we were high although certainly not dry on the rocks. I yelled to the crew to get out and they quickly did so, sliding over the side just before another wave slammed into us, once again filling the boat with water.

I was the only person left in to boat, remaining behind the wheel trying to raise the outboard. It was jammed in the rocks. Colin was frantically pushing on the bow and Ryan was shoving on the stern.

Suddenly, a woman with a blue shirt who I later found out was Police Chief Meralda Warren was waist deep in the surf pushing and a group of island men were bringing a line across the harbor to the Zodiac.

The islanders and my crew were taking a big risk as they pushed and shoved the boat between the devil's brew and the rocky shore. Finally, I was able to raise the outboard. The line was attached and pulled the boat back into the surf where another wave swamped the boat but was unable to dash it back on the rocks as other islanders pulled me towards the Quay and alongside where they lowered a hook from a crane. I quickly attached it and the boat was pulled from the sea.

I looked across the water and saw that my crew were all standing on the shore.

The Zodiac was lowered onto the dock where I found that we had busted up the blades on the prop and cracked the fiberglass bottom of the Zodiac. The damage could be repaired.

Ryan lost his camera but there were no injuries, not even minor ones. Lisa had lost her sandals. Gunter's entire bag of cameras were dry and untouched and my bag containing the passports for the crew plus the mail going ashore was soaked but I had wrapped both passports and mail in plastic bags and everything was dry.

I shook hands with Mayor Jay Warren who had arrived on the dock with boxes of bananas, papayas, coconuts, eggplants, carrots, and green onions for us. We gave him our hearty thanks.

Meralda Warren, soaked and barefoot ,introduced herself as both police officer and immigration officer. I handed her the passports and she stamped us into the colony.

We were quickly informed that our experience was not unique. The Landing at Bounty Bay is notorious. Mayor Warren's own daughter had her arm almost severed in a similar accident less than a year before and had only returned to the island a week before our arrival after ten months of hospital care in New Zealand.

We then walked up the steep grade to Adamstown, a road that for two hundred years had been a dirt path until only two weeks ago when it had been solidified in concrete, the recent construction immortalized in freshly dated inscriptions by islanders before the concrete set.

We visited the Port office. We had agreed to take the island's mail to Wellington, New Zealand. We mailed our letters which ironically would be delivered back to us for re-delivery in Kiwiland.

After a brush with fate, it is always best to take a contemplative walk, and I did, meeting up with the rest of the crew who were bound for the same destination. A young man named Andy Christian accompanied them. We climbed the lava slopes upwards to a large triangular hole in the mountain called Christian's Cave. From up there, we could see thirty miles out to sea, the sheer immensity of blue cradling such a small rock in its midst. There were a dozen shades of blue surrounding the island; from turquoise blue to deep indigo inky blue and two miles off was a small black speck - the Farley Mowat.

We are so small against the sea and sky.

Sitting there in Christian's cave, where Fletcher Christian once sat and brooded as he looked out to the changing yet changeless sea was enlightening. Two hundred years later, one of his own descendents stands beside us as we look over Adamstown, linked with the history of the island and linked with the reality that our fates are often determined by our own choices.

Fletcher Christian came to this island to escape the wrath of the British Empire only to die three years later, murdered by the very women who had promised him paradise on earth. Pitcairn is a paradise but one that has taken a toll in suffering and deprivation.

I smiled that fate had not left us as corpses on this remote Polynesian shore. Perhaps some other distant shore, at some other time but not today.

Mayor Jay Warren and his wife Carol invited the eight of us to lunch. It was a delicious meal of baked beans, homemade bread, home grown cabbage salad, tea, fruit juice and a desert of banana coconut pie.

The islanders took a boat out to the Farley Mowat where Ryan Rittenhouse and I went back onboard to allow the remainder of the crew to visit the island.

We went back in a large aluminum longboat. They loaded our damaged Zodiac into it. The Pitcairn boat crew timed it perfectly as we shot out of the little harbour and climbed the slope of an incoming roller and literally flew over the top, the entire craft airborne as we pancaked down with a kidney-jarring smack.

The rest of the crew were given the opportunity to go to the island, and we sent back gifts of spices, condiments, videotapes, and two good mooring ropes.

At 1730 Hours, the longboat returned with the entire shore crew and with six large sacks of mail for delivery to Wellington.

So, for the next two weeks, we are an official mail boat on the Pitcairn to New Zealand run. It is indeed an honour.

But I can say with all honest,y that I have never met a braver, friendlier, more interesting group of islanders anywhere on this planet as friendly nor as interesting as Pitcairn Island.

I love this place and my crew shares my opinion that we have been privileged to have had the opportunity to visit Pitcairn, even if it did almost kill us.