The Sea Shepherd crew intends to return to the Southern Ocean in a campaign to be called Operation Zero Tolerance. Zero Tolerance illustrates our objective of zero kills by the Japanese whalers and it is a title that makes use of the image of the Zero in Japanese history. Sea Shepherd is confident that four ships and two helicopters plus unmanned drones will give the Whale Warriors the combination of speed, range, strength, and communication abilities to accomplish this zero kill objective.

Four ships, four captains, and over 120 crew from around the globe represent a force to be reckoned with, and once again the integrity of the Southern Ocean Whale Sanctuary will be defended by the Sea Shepherd Conservation Society.   Sea Shepherd is proud to include Sam Simon in the short and distinguished list of compassionate, dedicated, and concerned activists whose names have graced Sea Shepherd ships over the years.   This list includes Edward Abbey, Cleveland Amory, Farley Mowat, Robert Hunter, Steve Irwin, Brigitte Bardot, Bob Barker, and now Sam Simon.

Sam Simon, co-creator of The Simpsons is a longtime champion of animals and a wonderfully compassionate human being. The Sea Shepherd Conservation Society is proud to have him on our Advisory Board and proud indeed to be launching a ship bearing his name. The Sam Simon will be taking a leading and important role in Operation Zero Tolerance in defense of the whales.   Thank you Sam. We will make you proud of this ship and what it can and will accomplish. 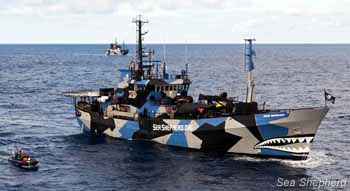