The Life Raft for the Norwegian Sailboat Berserk Has Been Found 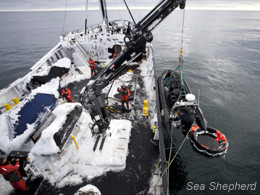 he deck crew lowers their inflatable boat into the water to recover the life raft. Photo: Barbara VeigaThe Sea Shepherd crew has been conducting the search on a very disciplined grid for over 24 hours. The crew is confident that if the yacht Berserk were still afloat it would not have drifted as far north as the liferaft, and would have been discovered. All indications are that the Berserk has sunk and that it sank very quickly. The conditions at the time were extremely high winds, extremely low temperatures, very heavy seas, and numerous and very dangerous growlers.

Captain Paul Watson regrets to say that the three missing sailors are most likely lost at sea and the recovery of their bodies is very unlikely. The shorelines have been swept in search of survivors.

“We will continue searching, but the boat and debris would not have drifted further North than this raft, and we have done a very extensive and meticulous search of the area between the positions where the distress signal was issued and the raft was found. In my opinion, the conditions at the time of the distress call presented some very serious threats to such a small vessel. Considering that the distress signal was automatically sent and the lifeboat appears to have been released after the vessel was submerged, my opinion, and I hope I am wrong, is that the Berserk sank rapidly at the point where the distress signal was first detected in a depth of about 500 meters and a distance some six miles off shore at the position of 77 Degrees and 25 Minutes South and 166 Degrees and03 minutes East. Considering the extreme conditions it is unlikely, but not impossible that any of the crew were able to leave the vessel before it was lost. Unfortunately we have seen no evidence of survivors.” 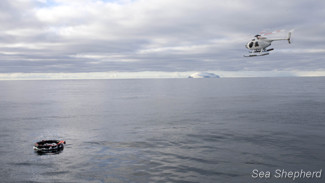