The Japanese Whalers are On the Run Again

The Japanese Whalers are On the Run Again

From aboard the Sea Shepherd ship Steve Irwin

The Japanese whaling fleet is on the run again.

A few hours earlier, the Steve Irwin had been side tracked when it chased a vessel that turned out to be a Namibian Toothfish vessel. The Antalles Reefer registered in Walvis Bay was found at 0200 Hours. The vessel refused to give a fishing permit number and threatened the Steve Irwin by reporting that it was armed. The Captain of the Antalles Reefer claimed to speak only Russian. The Steve Irwin has a Russian speaking crewmember and during the conversation the Captain said he would resist with force if there was any interference with his operations.

Captain Paul Watson relayed the information to the Australian Customs vessel Oceanic Viking and reported that a suspicious toothfish fishing vessel was operating inside the Australian Economic Exclusion Zone.

The Steve Irwin is now pursuing the Nisshin Maru and two harpoon vessels with the Fukuyoshi Maru No. 68 in pursuit of the Steve Irwin.

"The great Southern Ocean whaling ship chase is on again," said Captain Paul Watson. "I don't think any whales are going to be dying today. Our goal is to keep the harpoons quiet for the next three weeks."

The weather is good, the seas are calm and the chase is threading its way southwest through an obstacle course of icebergs, growlers, and bergy bits.

The Steve Irwin has plenty of fuel, water and provisions and a crew that is committed to shutting down the illegal whaling operations of the Japanese fleet.

"I can't think of a place I would rather be right now," said Jeff Hansen from Fremantle, Western Australia. "Seeing the Japanese whalers running like cowards from the Steve Irwin is a very satisfying experience."

The chase is taking place some 80 miles north of the Shackleton Glacier off the coast of Queen Mary land, well inside Australian Antarctic Territorial waters.

On January 15th, 2008, an Australian Federal Court ordered that Japanese whaling be "restrained" in Australian territorial waters. The Sea Shepherd crew is acting to enforce that court order and to uphold numerous  international regulations that the Japanese whaling fleet has and continues to violate. 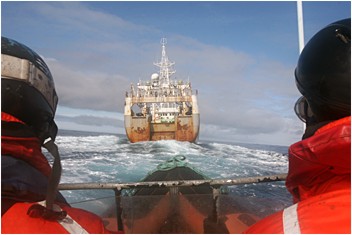