The Hunt for the Killers Resumes

The Hunt for the Killers Resumes


Report from Captain Paul Watson
From Onboard the Steve Irwin

The Crocodile Hunter is now hunting pirate whalers and with a bone in her teeth, the Sea Shepherd ship Steve Irwin is presently cleaving the swells in a race to return to the Southern Ocean Whale Sanctuary where the blood of the whales is flowing freely amidst the heart -breaking screams of whales dying in horrific agony at the hands of black hearted cetacean serial killers. 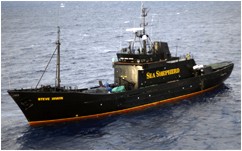 It has been a frustrating week but thanks to an incredible effort on the part of a few crew and shore supporters, the Sea Shepherd ship Steve Irwin now has engine efficiency restored to 100% and we are ready to resume the search for the elusive Japanese whaling fleet.

It was a difficult decision to return in mid December after reaching the coast of Antarctica . We could have proceeded on our one engine which still allows us over 14 knots but I decided we needed speed superiority over the Japanese ships and that could only be done with both main engines working together.

And so we headed back arriving on the morning of Christmas Eve and dropped anchor at Williamstown near Melbourne .

Chris Aultman had done a wonderful job of procuring the parts needed to address the repairs. The port engine had dropped a fuel valve into the piston and within seconds that valve was slammed by the piston against the cylinder liner and the head causing extensive internal damage requiring the replacement with a new piston, new head, and new cylinder liner. The parts ordered from Scotland at a cost of 30,000 British pounds were waiting for us when we arrived back in Australia .

Chief Engineer Charles Hutchings made the repairs within a day only to discover that the shattered valve had sent pieces of steel into one of our four turbo chargers completely destroying that complex and expensive piece of machinery.

Chris Aultman contacted the local ABB Ltd. agent John Thomson who was actually on a beach enjoying his holidays. He agreed to come the next morning to dismantle the turbocharger and ABB had a new replacement assembled in Zurich , Switzerland and on a plane within three hours. Mr. Thompson arrived on the morning of the 1st of January and installed the unit and waived his fee. We don't know what the actual cost of the unit is because ABB will bill us later but we suspect it will be fairly expensive but we had no choice as it is essential. We were grateful for their exceptionally efficient service and especially between Christmas and New Years.

The consequences of returning to port in the middle of a campaign with a volunteer crew are that we were bound to lose a few.

First we lost Fern Holland and Rob Langstaff due to chronic seasickness. Mihirangi, Brad Axiak, and Simon King had to leave because the delay cut into the time in February when they had events or appointments scheduled. Mihirangi as a popular musician has a tour beginning in early February, Simon has scheduled knee surgery and Brad has a wedding. All three of whom were honourably discharged.

And then we lost the usual few, whose experience of a campaign did not live up to their romantic expectations of what a Sea Shepherd campaign is about. Saving whales means operating a ship and working within the hierarchy of the ship's command structure. This is an alien concept to many people unfamiliar with going to sea. Thus six volunteers deserted due to the disillusionment factor. And this is a good thing. We cannot expect people to risk their lives when they can't endure or tolerate inconvenience, practical orders, necessary discipline and the reality of a ship's day to day operations.

What this means is that we are now under way with a few less crew but a far more committed crew. I suppose we can look at the first run down to the Antarctic coast as a shake-down crew to see who is fully committed because that commitment will be needed if we are to make a difference when we find the Japanese whalers.

As First Officer Peter Brown said in response to crew departures, "I think a few people are realizing that this isn't summer camp."

The truth is that this mission is of absolute commitment and dedication. This is not rhetoric when we say we are willing to risk our lives to protect the whales. We have done so many times and we will continue to do so. We are not afraid of losing our ship and we are not afraid of dying and I will tell you why.

We sail as shepherds in defense of some of the most incredibly awesome living beings on this planet - we sail to save lives and to oppose horrendous cruelty and we sail against a violent ruthless opposition - whalers from Japan, all members of a Yakuza controlled union, all crewmembers on one of the largest floating aquatic death platforms ever constructed. The Nisshin Maru is the Cetacean Death Star and the most evil ship sailing the high seas today. It must be destroyed if the whales are to live.

There are a thousand sentient, intelligent, socially complex, awesome citizens of this planet whose lives will be ruthlessly snuffed out by these vicious Japanese harpoons. In fact these whales are dying now, spilling their hot steaming blood into the frigid black waters of the Southern Oceans, slaughtered in an area designated as a Whale Sanctuary and killed for no other reason than to assuage Japanese national pride.

These are self aware beings who have caused humankind no wrong or distress. Instead they have given us their beauty and filled our hearts with wonderment and admiration. And there is much that they could teach us if we would only set aside our conceit and accept that these are beings of exceptional intelligence and perceptions. They are equal to us and deserve our respect and they deserve the right to live unmolested from the horror of human violence.

Most people are moved by whales especially those who have seen them. For many people, seeing a whale is a life changing experience.

Throughout my life I have been privileged to have swum with and communicated with a great many whales. I have clung to an Orca's dorsal as it dove into the cold clear waters of the Straits of Bella Bella, I have swum alongside the Humpbacks off Maui and been alongside the Grey whales in Magdalena Bay . I had my life saved by a dying Sperm whale off the coast of Northern California and surfed with dolphins off Malibu . They are my family, my friends, and living treasures to the Oceans, in fact they are the very soul and mind of the seas and as a lifelong sailor, surfer and diver, I have a duty to do all within my power to protect them from the savageness of the darker side of humanity.

And perhaps this will only come about through the sacrifice of our lives and freedoms. That is why we risk our lives in an effort to stop this insanity. We must do as Walt Whitman wrote in his poem - risk our ship, ourselves and all!

I am often asked if I am prepared to die for a whale. It is a difficult question to answer. When I was in my twenties I had no hesitation and I blocked the harpoons without a thought nor care. The young do not think of dying when it matters most, only later does reflection allow for the hesitation of caution. But over the years I have faltered occasionally and found myself being cautious and wary, the two things that in fact can kill you.

It is a condition that I refer to as falling from grace with the sea. And it is a dangerous condition and one that I sometimes forget about.

When one is at grace with the sea, then the sea is friend, protector, and guide. We become in spirit, the sons and daughters of Poseidon. We need not fear the sea nor those enemies that ride upon or within her. We need not fear any citizen of the sea and we need not fear for failure. We flow with the sea and we let the sea guide us and we allow the sea to bring us to our objective. In return the sea demands nothing less than our courage, our resolve and our absolute respect. Let any of these three demands fall by the wayside and the consequences are always disastrous.

This might sound a little silly to most people but there are a great many sailors and even more surfers and a large number of divers who know exactly what I'm talking about.

And how much more noble and worthwhile is it to fight and to risk one life for the preservation of a species, the prevention of extinction of creatures that have existed upon this planet for tens of millions of years before we came along and began to kill them off. Certainly that is a worthy as going to war over real estate, religions and resources, the three things that most human conflicts are caused by and have been the cause of hundreds of millions of human deaths over the centuries. Society bestows medals on people who fight in such conflicts yet questions the sanity of those who fight selflessly for the preservation of life.

As the lyrics of the song by the Red Hot Chili Peppers put it, "I could die for you." For that is the ultimate commitment of love - the willingness to die in defense of another or for others - the greatest expression of selflessness and courage that any person can demonstrate.

I love this Earth and I love her oceans especially so. Since the day I sat as a boy on a pier on Passamaquoddy Bay to this day as I command this ship in the Roaring Forties of the Southern Oceans en route to do battle with pirate whalers, I have served the sea with all of my strength and endurance. And the sea has been good to me and as a result I have never lost a crewmember to accidental death or injury, and I have never been the cause of a death or an injury to those we intervene against. But there is a cost for the sea is a harsh mistress but it is a cost that I decided many years ago was acceptable for the rewards have been worth the ordeals and the treasure I have sought is the living heart of the sea itself and keeping that heart beating is the greatest contribution that I can imagine bequeathing to the future... and yes I could die for that.