The following article from the Vancouver Sun appeared today in response to international protests against the slaughter of baby seals in Canada.

The Canadian government and media regularly criticize the movement to end the seal hunt for using celebrities to get the message across yet the media usually only reports on the seal hunt only when a celebrity is involved as illustrated in the story below.

The lie that the Canadian media keeps perpetuating is that the anti-sealing movement focuses on baby seals when according to the Canadian government, baby seals have not been killed for years.

The fact is that over 90% of the seals killed are in fact baby seals. Canada did ban the whitecoat hunt (i.e. seals under two weeks of age) and now insists that seals over two weeks old are adults.

The government complains that there are few images shown of non-whitecoat seals being killed and that all the images of whitecoats being clubbed are misleading. Yet it is illegal to take photos or to film the seal hunt so many hunt opponents have no choice but to use older images of whitecoats being killed. The Sea Shepherd Conservation Society uses images of seals being killed that are over two weeks of age but to do so meant we had to break the so called "Seal Protection regulations" to do so.

One thing that should make the Canadian government and the sealers happy is that the hunt opponents like ourselves won't be asking for money anymore to oppose sealing. And that will make us happy also.

PARIS - Pop legend Paul McCartney, who once called the seal hunt a "stain" on Canada's image, urged demonstrators gathering in Brussels Tuesday to complete their fight for a European seal products import ban.

The ex-Beatle said an EU ban could successfully shut down the international sealing industry.

"Stopping the import of seal fur into the European Union could really put an end to this brutality once and for all," he said in a video message played at the event. "Please ask the EU to ban this terrible trade today."

Organizers of Tuesday's demonstration said the event wasn't timed to coincide with Canada Day, even though the hunts in Canada and Namibia are the prime targets of the powerful and well-financed anti-seal hunt movement.

The demonstrators, joined by EU parliamentarians, "held a minute's silence in honour of the millions of seals that have been killed in the last few decades, and blew whistles to show their disapproval with the hunt," according to a news release from the Eurogroup for Animals coalition.

McCartney and Heather Mills, his wife at the time, visited Canada in 2006 to pose with fluffy white baby seals and called on Prime Minister Stephen Harper to end the "heartbreaking" hunt that has left a "stain" on the Canadian character.

Other celebrities who have fought the seal hunt include Mick Jagger, Martin Sheen and Brigitte Bardot. They often pose with the baby seals even though Canada has had a ban on whitecoat hunting for more than two decades. 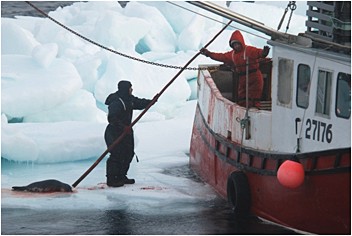 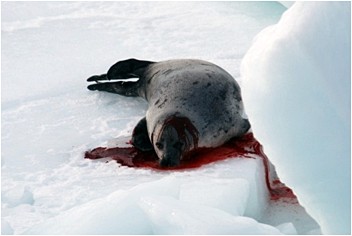