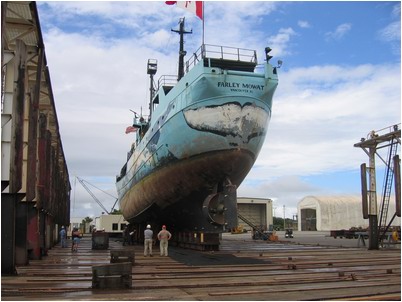 The result is that the ship is now ready to face the challenges of the Pacific and the Southern Oceans, to protect the Galapagos, and to defend the whales from the illegal operations of the Japanese whaling fleet in the Antarctic Whale Sanctuary.

The biggest concern was that the ship has been suffering a series of serious hull breaches since 2003. The first occurred in New Zealand in the spring of 2003. A temporary patch was put on underwater and a doubler was welded on in Seattle in early 2004.

Unfortunately, a breach occurred again in February of 2005 between Bermuda and Portland, Maine. Our divers inserted a temporary wooden plug and had a temporary patch welded on the hull in Portland. Two weeks later, a second breach occurred just as the ship was entering the ice fields of the Gulf of St. Lawrence. Again our divers inserted a wooden plug and the ship returned to Eastport, Maine, where a second temporary patch was welded onto the hull.

Captain Watson made the decision to return to the ice with the temporary patches rather than abort the seal campaign. He realized the danger but decided that the campaign was more important than the ship.

Fortunately, two months of heavy ice and rough seas did not force another breach and the ship returned safely to Bermuda. A drydock was located in Jacksonville, Florida, and the ship proceeded there in late June. 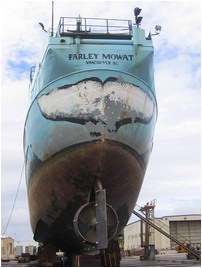 The plates in the area affected were removed and the problem was discovered. Over the years, (the ship was built in 1958), water had settled in the area between the frames directly below the main engine, a place that cannot be accessed from the inside. This water has steadily eaten away the metal from the inside in a process called aggressive pitting. In some places the half inch steel plate had been reduced to paper thin layers.

Ultrasound testing each year had failed to discover this problem. The only solution was to remove sixteen plates and add sixteen inserts of new half inch steel plate. We then welded a 12-foot doubler on each side of the keel on the area below the main engine. It will be some time before this problem reoccurs and the ship is now safe to return to sea.

We also found that the stabilizer fins were severely damaged by ice. Repairs were too costly so we had them removed. Our engineers decided that removal would not have any negative consequences.

The ship's bottom was repainted and anti-fouling applied.

In total the costs of drydocking amount to approximately $150,000.

The ship is now in the water and berthed in Jacksonville. We still have to replace the anchor chain and add transport supplies and equipment to the vessel. We are loading parts for the rebuilding of the engines of our patrol boat Sirenian based in the Galapagos. We are also gathering supplies for the rangers of Malpelo Island off the coast of Colombia and we are taking on equipment for our campaign to hunt down the Japanese whaling fleet in Antarctica. Additionally, recruiting new crew is a high priority for the next six months of campaigns.

Unfortunately, we had to remove the incredible marine wildlife artwork by Dutch artist Geert-Jan Vons. The need to continually repaint the ship's hull means that murals have a limited life-span. The hull and super-structure have been repainted black. We plan to have Geert return before the whale campaign to paint another design on the ship.

The ship should be ready to depart from Florida on August 10th, 2005.

We can only do this with the support of people who are dedicated to protecting and defending our oceans. 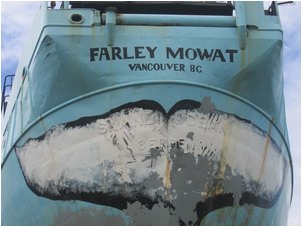