The Farley Mowat is With the Baby Harp Seals

The Farley Mowat is With the Baby Harp Seals 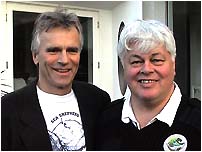 They will travel by helicopter from Charlottetown airport to the ice floes of the Gulf of St. Lawrence where they will join the international volunteer crew onboard the Farley Mowat. While on the ice floes, Richard Dean Anderson will be posing for pictures with new born baby harp seals.

The Farley Mowat entered the nursery zone of the harp seals early Sunday morning. The crew are now among the baby harp seals.

Richard Dean Anderson will return to Charlottetown on Monday to hold a press conference and conduct interviews.