The Dolphins Need Your Help!

In December 2011, the Japanese police ran with false allegations and charges against Cove Guardian Erwin Vermeulen.  Erwin was eventually declared innocent of the charges in a Japanese courtroom and the authorities were embarrassed.  During the “investigation” the police seized our computers, which would have shut us down had we not quickly replaced the equipment and put it into use.  Many supporters the world over responded and made donations to help Sea Shepherd replace the equipment and get back on campaign.

Now the Japanese police have jumped upon an unfortunate accident and are trying to turn it into something it is not.  We certainly did not want the statue to be damaged.  We are very clear in our instructions to the Cove Guardians that we will not tolerate the breaking of any Japanese law.  In addition, the police have used the excuse of another bogus “investigation” to disrupt our communications.  We will not let them prevail and with your help, we will raise the funds needed to replace the critical equipment being deployed by the Cove Guardians.  We need about $4,000 USD to replace the equipment and set up the service and connections required to keep the campaign moving forward.  Please help us to raise these funds!  Any excess funds will be used for rental cars, fuel, phone service, Internet, etc.

We continue to monitor the capture and transport of wild dolphins to marine parks and dolphinariums around the world.  These places profit from dolphin misery.  There is no legitimate reason to capture and keep dolphins and other cetaceans captive.  We are working to follow up on leads regarding the dolphins recently moved out of Taiji.  We documented a western man involved in this transfer and will publish his identity and their destination once we have this information confirmed. 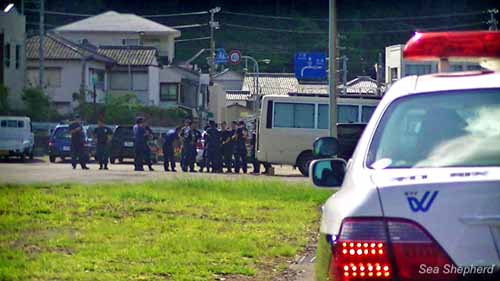