The Death Star Returns to the Land of the Rising Sun

The Death Star Returns to the Land of the Rising Sun

No More Whales Will Die This Season

Finally, the burnt-out hulk of the whale killing floating factory called the Nisshin Maru is limping out of the Antarctic treaty zone, the stench of rotten whale meat lingering in its wake. The whale-killing fleet is now slowly heading north to Japan. There will be no stopping in New Zealand for repairs. A stop there will result in legal issues that could tie the ship up for years and the whale meat onboard would be confiscated. 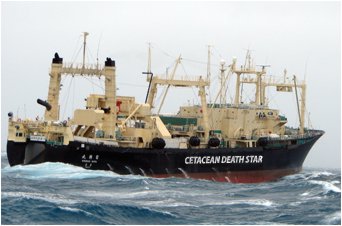 The whaling fleet has a long way to go to reach Tokyo. The crew will be mourning the loss of one crewmember and remembering the opposition by Sea Shepherd that left their decks reeking of rotten butter and awash with the blood of the whales caused by Sea Shepherd crew sealing the bloody flensing deck outlet drains. It is a ship that reeks of death, burnt flesh, gore, and blood. It looks and smells like the Death Star that it is. 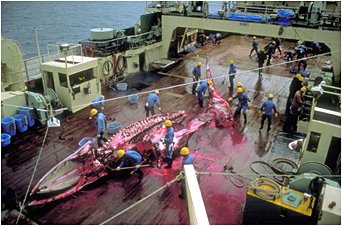 The image of the Nisshin Maru retreating from the Antarctic Whale Sanctuary is joyous news for all people who love whales. This ship is the single greatest whale-killing machine of all time and the only thing more pleasing to us would be to see its total destruction. Fortunately, this did not happen in the Whale Sanctuary, because the sinking of the ship would have been an ecological disaster.

Whaling is now officially ended for the 2006/2007 season and the unofficial final whale body count appears to be less than 500 whales of their 935 targeted piked whales. It is not known how many of the targeted fin whales were killed.

The Nisshin Maru is severely damaged. The main engine was started but electrical systems are barely functioning. The whale processing equipment is ruined. The winches used to haul up the whales are inoperable. The cargo of whale meat onboard has been partially if not completely spoiled by loss of refrigeration and intense heat. In addition, the whale meat has been contaminated by chemicals used to fight the blaze and spilt during the fire.

The disaster has highlighted the fact that the Nisshin Maru is an environmental disaster waiting to happen. This year, Antarctica's wildlife was spared the tragedy of an oil and chemical spill that would have occurred if the 8,000 ton ship had sunk with hundreds of thousands of gallons of oil and an unknown amount of chemicals like ammonia and chlorine.

This is the second serious fire on the Nisshin Maru in 10 years. The whaling vessels are not ice-class. Japan has put their pride before any concern for the protection of Antarctic ecosystems and wildlife. Their lust to kill whales has become obsessive and blinds their common sense.

"What Japan has just demonstrated over the last 10 days," said Founder and President of Sea Shepherd Captain Paul Watson, "is a total contempt for international concerns for the environmental protection of Antarctic wildlife. This whaling fleet is an ecological time-bomb. The potential for disaster is a real and ever present danger when they are down in the Whale Sanctuary illegally slaughtering endangered whales."

The whaling fleet spotting vessel the Kaiko Maru is also heading home marked with the scars of their deliberate collision with the Sea Shepherd ship Robert Hunter. The Japanese crew on both the Nisshin Maru and the Kaiko Maru saw first hand the dedicated courage of our international volunteers in action during the confrontations. They were days they will not soon forget. 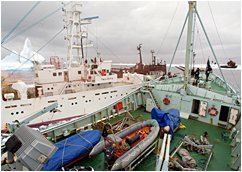 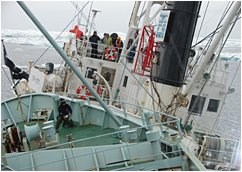 Sea Shepherd is already preparing to return to the coast of Antarctica in December 2007 to once again intervene against illegal Japanese whaling activities.

"We have discovered weaknesses with the Japanese ships that can be exploited given the right equipment. We learn more about these ruthless killing machines every year," said Sea Shepherd flagship Farley Mowat's Captain Alex Cornelissen. "Next year if they return to kill humpbacks and fins, we will have to take a more aggressive stand to stop these poachers."

The targeting of 50 humpbacks and 50 fin whales for the 2007/2008 season is a line in the sand where Sea Shepherd is prepared to take a stand.

"We cannot abide, tolerate, or ignore such a blatant slaughter of the highly endangered humpbacks," said Captain Watson. "The humpback is the symbol of our organization and a part of our logo. We will defend this species as aggressively as we can. Our position on the humpbacks and the fins is zero tolerance"

The 2006/2007 campaign is now officially over. The efforts of Sea Shepherd have highlighted the ongoing illegal activities of the Japanese whaling fleet. Our message was that the Japanese whalers were killing highly endangered whales in an international whale sanctuary in violation of the global moratorium on commercial whaling. Japan is engaged in numerous international crimes and they must be opposed and they must be shut down.

This year, call it fate, call it karma, or call it the will of God, but whatever it is, the results have been wonderful for the whales. All of us at Sea Shepherd are extremely satisfied with the ignoble retreat of the ruthless killers of the gentle giants as their disgraced and damaged ships limping shamefully home stinking with the corpses of their innocent victims.

Our message to the Japanese whalers: "We hope your damages are so severe you will not be back next year but if you are, we will be there waiting for you and we will not be as polite as we were this year," said Captain Watson.

The Sea Shepherd ships Robert Hunter and Farley Mowat are now docked in Melbourne. Preparations have already begun to outfit a campaign to intervene against the possibility of a return of the whaling fleet in December.