As long as the harpooners continue tailing the Bob Barker and the Steve Irwin, they will prevent Sea Shepherd from closing in on the Nisshin Maru, however, in doing so Sea Shepherd will continue to keep these two vessels from whaling themselves. The fast interceptor vessel the Gojira continues to pursue its tracking of the Nisshin Maru westward. 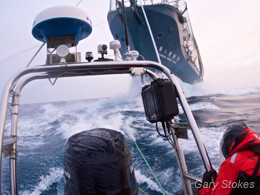 The Institute of Cetacean Research (ICR) stated that one of the Bob Barker’s small boats became entangled in their own prop fouling line and therefore became disabled. This statement is untrue. The inflatable boat became disabled after the confrontation with the Japanese whaling vessel, and solely due to damage to the pontoon from prolonged pounding against heavy seas.

“Our boat crew’s courage is amazing,” said Captain Paul Watson from the Steve Irwin. “They bravely put a great distance between themselves and the Bob Barker in this exercise, thereby exposing themselves to freezing temperatures in the open boats for many hours, in waters littered with growlers and small icebergs.”

As usual, the ICR described the confrontation as an “attack” but noted that no damage was inflicted to the Yushin Maru No. 2 and there were no injuries on either side.

Today marks the eleventh day since Sea Shepherd successfully located the Japanese whaling fleet before they could begin whaling. During this time, the Yushin Maru No. 2 and Yushin Maru No. 3 have been unable to fire single harpoon. The Yushin Maru No. 1 is presumably with the Nisshin Maru fleeing westward. A fishing vessel sighted them on January 9th relaying their position to Sea Shepherd. Considering the distance the Yushin Maru has covered during the last eleven days, the speed at which they are traveling, and the fact they only have one harpoon vessel with them, the chances of them whaling are low, and if any whaling has taken place, it will be minimal.

There are still two months remaining, and Sea Shepherd will maintain their pursuit of the Japanese whalers until the end of the whaling season to ensure the maximum number of whales will be saved.

At about 1800JST two zodiac boats sent from the Bob Barker rapidly approached the Japanese vessel and the activists started hand-throwing at least two flash bangs and one smoke bomb toward the YS2. One of the flash bangs landed in the bow and the other two projectiles got entangled on the port-side protecting net of the Japanese vessel.

During the attack the Yushin Maru No. 2 broadcasted a warning message and made use of its water jet-pump as a preventive measure to make the activists desist from further approaching. The hook and rope attached by the activists to the YS2 handrail detached itself falling to the sea.

The flash bang and the smoke bomb that got entangled to the port-side protecting net were burning for a while but fortunately the fire did not spread to the net itself. Neither injuries to the Japanese crew nor
damage to the YS2 resulted from the activists’ attack.

Japan’s research whaling in the Antarctic (JARPAII) is a perfectly legal activity carried out under the International Convention for the Regulation of Whaling (ICRW). The Institute of Cetacean Research strongly condemns the Sea Shepherd Conservation Society and its continued dangerous and violent actions against Japan’s whale research vessels in the Antarctic. We call on all related countries including the Netherlands which is the Bob Barker flag state and Australia, the virtual home port of the SS vessels, to stop condoning the Sea Shepherd Conservation Society violent actions and to take every means available to restrain them. Further, we strongly request that these countries deal with the SSCS criminal actions in a strict and objective manner according to their international obligations. 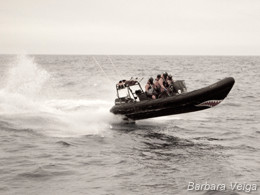