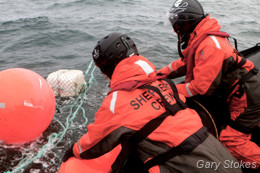 Sea Shepherd crewmembers pull in the
illegal longlineSimultaneously, a large vessel about 70 meters in length was spotted some nine miles away. The Bob Barker contacted Captain Paul Watson for advice and he advised hailing the vessel on channel 16 identifying us as the “Southern Ocean’s patrol vessel the Bob Barker.” We made this call four times but instead of replying to us, the vessel immediately turned away and fled the area at 11 knots.

Once the vessel fled, it became clear that this was an illegal line targeting Patagonian toothfish. Our crew started pulling in the first line at 22:30 hours. The water depth was at two kilometers, so it turned out to be a long haul to even get to the setline, which was attached to a gill net. We managed to get the net onboard.

Three sets of buoys were further discovered during the retrieval of the net.  We have now collected 12 orange buoys that will make excellent fenders and several kilometers of solid, partly new longline rope.

It is illegal to set buoys, lines, and nets without identification numbers or the name of the vessel. This along with the fact that the vessel failed to respond to the calls from the Bob Barker and immediately fled the scene, were all clear indications that the ship was poaching. The fishing vessel’s name, flag, and identification numbers could not be identified due to the long distance between it and the Bob Barker.

Confiscating illegal longlines and nets from the Southern Ocean has been a regular occurrence for the Sea Shepherd Conservation Society for the last seven years of their Antarctic Whale Defense campaigns.