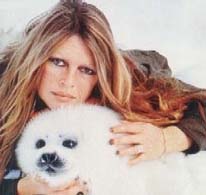 With that one iconic photo alone, Bardot brought the cause and need to protect harp seals to the world’s attention, a pivotal point in the fight to stop this annual Canadian obscenity of cruelty and mass slaughter.

Sea Shepherd and the Brigitte Bardot Foundation have worked together in partnership for many years, recently teaming up in an effort to end the barbaric slaughter of pilot whales in the Danish Faeroe Islands.

And thus, the newly painted Brigitte Bardot is now part of the Sea Shepherd fleet joining the Steve Irwin and the Bob Barker in our ongoing campaigns to defend life in our oceans from illegal exploitation by high seas poachers.

Captain Albert Falco, the legendary oceanographer of the Cousteau Society, broke a bottle of champagne on the bow of the Brigitte Bardot to officially launch the vessel under her new name. The ceremony was attended by Sea Shepherd crew and staff, along with members of the Brigitte Bardot Foundation, and the media.

“It’s a beautiful ship with a beautiful name and it is a vessel that will reflect the compassion of Brigitte Bardot in partnership with the passionate interventionist direct action tactics of Sea Shepherd,” said Captain Watson.

Bardot was not in attendance but participated in the launching with Captain Watson describing the ceremony to her in real time. She told Captain Watson she was “delighted...and you and your crew warm my heart with your courage and dedication.”

“Captain of my heart.”

I’m moved, overwhelmed and infinitely grateful that this wonderful “ savior of the seas” will wear my name to fight against those who allow themselves to butcher what is most precious in the oceans.

Thank to you Paul for this magical idea that fulfills me with pride.

Together we will win!

You are the strength and the courage, I’m the love and determination.

May the Brigitte Bardot led by Paul Watson be a symbol of victory,