Japan has now officially announced that they will not kill humpback whales this season. Migaloo and the other humpbacks are safe, at least until December 2008.

In a deal brokered by the United States, Japan has agreed to remove the humpbacks from the death list for this season. There have been no reports from the Japanese fleet on how many humpbacks if any have been killed so far this season.

Japan still intends to continue to kill 50 endangered Fin whales and 935 piked (minke) whales. Japan put the humpbacks on the list at the 2007 International Whaling Commission meeting primarily as a bargaining chip to broker for support of their commercial whaling activities on other species. That tactic failed and Japan set forth to punish the pro-whale nations of the IWC by announcing the quota for endangered humpbacks.

Unfortunately this is only a temporary respite for Migaloo and his species. Japan is determined to continue to escalate their kill quotas and to expand to other species. The Japanese are planning the construction of a much larger whale processing vessel to replace the aging Nisshin Maru.

The Sea Shepherd Conservation Society hopes that Australia will closely monitor Japanese whaling operations to ensure that no humpbacks will be killed. The Japanese whaling fleet has a long history of under reporting catches to the IWC.

The Sea Shepherd Conservation Society will be returning to the Southern Ocean Whale Sanctuary to intervene against Japanese whaling operation directed at endangered fin whales and piked whales.

The Sea Shepherd ship Steve Irwin will be stopping briefly in Melbourne to pick up essential engine parts and to refuel before returning to the Antarctic coast. The Steve Irwin has just spent two weeks patrolling the Eastern side of the Japanese hunting area. Japan has always started their whaling on the Eastern end but this year to throw off opposition they traveled via the Lombok Straits and down the Western side of Australia to begin their killing at the extreme Western side of the zone. The Steve Irwin should be in this area by the first week of January 2008.

The decison to call off the humpback whale kill for this season is the result of intense international public opposition to the targeting of humpback whales. Operation Migaloo has been a success, at least for this season. Now we have to concentrate on defending the 985 whales including the fifty endangered fin whales that Japan is training their harpoon sights on right now. 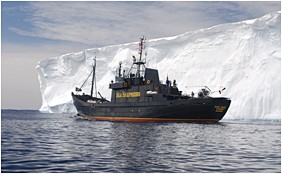