In honour of the memory of Martin Luther King, Sea Shepherd Conservation Society hereby renews and reaffirms our commitment to non-violent intervention against illegal exploitation of the oceans.

Since Sea Shepherd Conservation Society was founded in August of 1977, no person has ever been injured or killed because of a Sea Shepherd action. We have an unblemished history of not causing physical harm to our opponents. It is a record we intend to keep.

There are some who accuse Sea Shepherd of being violent for targeting property. However, the Society has no apologies for damaging property which is being illegally utilized to take life and to destroy habitat.

In his "Letter from Birmingham Jail" in 1963, Martin Luther King's said:

"In any nonviolent campaign there are four basic steps: collection of the facts to determine whether injustices exist; negotiation; self-purification; and direct action."

We have collected the facts and we have determined that an injustice exists. The Japanese whaling fleet is in open violation of the following international conservation laws:

We have voluntarily submitted to self-purification. In answer to the Japanese argument that we cannot save whales and eat meat, we counter this charge of hypocrisy by operating a ship that does not serve meat. In response the Japanese whalers now call us "dangerous vegans."

Finally, because governments have refused to uphold their commitment to the enforcement of international conservation law and the Japanese whalers have refused to negotiate, Sea Shepherd has committed itself to non-violent direct action that does indeed target property used for illegal exploitation but also exercises all precautions to not cause bodily harm to any whalers.

"You may well ask: "Why direct action? Why sit-ins, marches and so forth? Isn't negotiation a better path?" You are quite right in calling, for negotiation. Indeed, this is the very purpose of direct action. Nonviolent direct action seeks to create such a crisis and foster such a tension that a community which has constantly refused to negotiate is forced to confront the issue. It seeks so to dramatize the issue that it can no longer be ignored. My citing the creation of tension as part of the work of the nonviolent-resister may sound rather shocking. But I must confess that I am not afraid of the word "tension." I have earnestly opposed violent tension, but there is a type of constructive, nonviolent tension which is necessary for growth. Just as Socrates felt that it was necessary to create a tension in the mind so that individuals could rise from the bondage of myths and half-truths to the unfettered realm of creative analysis and objective appraisal, we must see the need for nonviolent gadflies to create the kind of tension in society that will help men rise from the dark depths of prejudice and racism to the majestic heights of understanding and brotherhood.

The purpose of our direct-action program is to create a situation so crisis-packed that it will inevitably open the door to negotiation. I therefore concur with you in your call for negotiation."

This is, of course, exactly what Sea Shepherd is doing in Antarctic waters. We are dramatizing the issue and we are increasing tension. We are indeed creating a situation that is crisis-packed for the purpose of opening the door to negotiation.

"You express a great deal of anxiety over our willingness to break laws. This is certainly a legitimate concern. Since we so diligently urge people to obey the Supreme Court's decision of 1954 outlawing segregation in the public schools, at first glance it may seem rather paradoxical for us consciously to break laws. One may well ask: "How can you advocate breaking some laws and obeying others?" The answer lies in the fact that there are two types of laws: just and unjust. One has not only a legal but a moral responsibility to obey just laws. Conversely, one has a moral responsibility to disobey unjust laws. I would agree with St. Augustine that "an unjust law is no law at all."

Now, what is the difference between the two? How does one determine whether a law is just or unjust? A just law is a man-made code that squares with the moral law or the law of God. An unjust law is a code that is out of harmony with the moral law. To put it in the terms of St. Thomas Aquinas: An unjust law is a human law that is not rooted in eternal law and natural law. Any law that uplifts human personality is just. Any law that degrades human personality is unjust.

I hope you are able to ace the distinction I am trying to point out. In no sense do I advocate evading or defying the law, as would the rabid segregationist. That would lead to anarchy. One who breaks an unjust law must do so openly, lovingly, and with a willingness to accept the penalty. I submit that an individual who breaks a law that conscience tells him is unjust and who willingly accepts the penalty of imprisonment in order to arouse the conscience of the community over its injustice, is in reality expressing the highest respect for law.

We should never forget that everything Adolf Hitler did in Germany was "legal" and everything the Hungarian freedom fighters did in Hungary was "illegal." It was "illegal" to aid and comfort a Jew in Hitler's Germany. Even so, I am sure that, had I lived in Germany at the time, I would have aided and comforted my Jewish brothers. If today I lived in a Communist country where certain principles dear to the Christian faith are suppressed, I would openly advocate disobeying that country's antireligious laws.

In your statement you assert that our actions, even though peaceful, must be condemned because they precipitate violence. But is this a logical assertion? Isn't this like condemning a robbed man because his possession of money precipitated the evil act of robbery? Isn't this like condemning Socrates because his unswerving commitment to truth and his philosophical inquiries precipitated the act by the misguided populace in which they made him drink hemlock? Isn't this like condemning Jesus because his unique God-consciousness and never-ceasing devotion to God's will precipitated the evil act of crucifixion? We must come to see that, as the federal courts have consistently affirmed, it is wrong to urge an individual to cease his efforts to gain his basic constitutional rights because the quest may precipitate violence. Society must protect the robbed and punish the robber."

In the case of our campaign to oppose illegal Japanese whaling, we have been forced to not obey the maritime rules of the road. We must disobey these rules in order to block and harass a criminal operation that seeks to slaughter whales. This really is the extent of our breaking the law. We are not assaulting anyone. We have not injured anyone. We have not even damaged any property; we have simply implied a willingness to damage property used for illegal exploitation of whales. We do not do this covertly. Indeed, we own up to our actions and freely admit and announce them, unlike the Japanese whalers who break the rules of the road and attempt to ram, and do ram ships, and then accuse the other side of being the aggressor when the documentation clearly demonstrates who was responsible.

Sea Shepherd crew are willing to submit to arrest and imprisonment for our actions because we believe that we are legitimately enforcing international conservation law against unlawful activities.

"But though I was initially disappointed at being categorized as an extremist, as I continued to think about the matter I gradually gained a measure of satisfaction from the label."

And so we feel the same. We are accused of being extremists, militants, radicals, pirates, and eco-terrorists. In other words, these labels can be translated into being equated with "effectiveness." As conservationists, we are conservatives, not radicals. Being called a terrorist by people terrorizing the whales through horrific violence is absurd and easily dismissed.

The Tibetan Buddhists have a symbol for what Sea Shepherd does. In fact, the Dalai Lama sent me a wooden carving that depicted the symbol. It is called "Hayagriva" and it means the "wrathful compassion of Buddha." What this means is that sometimes when you cannot convince your enemy to see enlightenment, you may need to scare the hell out of them until they do. 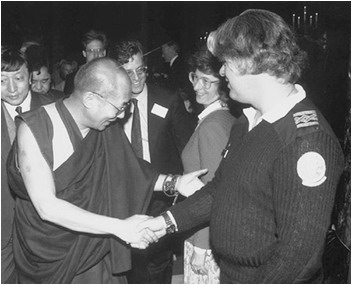