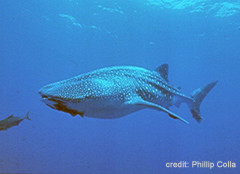 For months now, the Atlantis Resort in Dubai has kept a whale shark in captivity, which has become affectionately known by Dubai residents as “Sammy.” The resort heralded Sammy the whale shark as the star attraction of its aquarium during the resort’s grand opening last Fall. Since then, countless conservationists and concerned citizens have contacted local media in Dubai as well as the resort demanding the whale sharks release back into the wild. The aquarium claims to have “rescued” the shark and is keeping it for “medical observation” but has made no efforts to rehabilitate the shark.

Sea Shepherd has recently received additional news that the resort intends to open the aquarium as a special diving attraction, where resort patrons can pay to dive with the whale shark in its tank.

Sea Shepherd is very concerned for the safety of this whale shark and demands its release back into the ocean immediately. The timing is excellent, as divers have reported several recent sightings of whale sharks off the coast of the United Arab Emirates and Oman in recent weeks as part of their migratory pattern.

Whale sharks can reach lengths of up to 15-meters in the ocean, dive to depths below 980 meters, and migrate thousands of kilometers through open water. Whale sharks are vulnerable to extinction and often die in captivity. Multiple whale sharks have died in recent years at the Georgia Aquarium, raising concerns about efforts to keep whale sharks in captivity and emphasizing the need to protect the species in the wild from environmental devastation and the growing shark finning industry.

Help save Sammy the whale shark today by writing to Atlantis The Palm, Dubai demanding the release of this magnificent and ecologically important animal: