Less than 24 hours after professional surfer and Sea Shepherd supporter Dave Rastovich led an international group of over 30 surfers, celebrities, and musicians on a peaceful paddle-out ceremony to honor the more than 25,000 dolphins killed each year in Japan, fishermen in the tiny village of Taiji resumed the slaughter that had been delayed by the increased worldwide media attention.

In response, the surfers decided in solidarity to make a pre-dawn return to the killing cove to recreate the ceremony, albeit with fewer people to evade detection. Rastovich and the others paddled within a stone's throw of a pod of captive pilot whales and their calves who had been herded into the cove for early morning slaughter.

"The reason we surfers were there was to share the blood-stained waters at eye-level with our ocean kin awaiting their execution," said a dripping, visibly shaken Rastovich, just after paddling in. "Despite the fishermen taking great pains to hide their acts of cruelty, we seized an opportunity to bring this travesty to the world's attention."

Taiji-area fishermen, who kill dolphins and whales for their meat, netted off the bay and constructed green tarps to shield the slaughter from prying eyes and front-line cetacean activists bent on shutting down the dolphin trade forever. When the surfers learned of the imminent slaughter, they did not hesitate to return, despite the distinct possibility of violent resistance and police arrest.

Rastovich and his core team of surfers, trailed by camera crews, arrived at the infamous Taiji cove to paddle out to the captured pilot whales.  After entering the water, they quickly arrived alongside the whales, who swam back and forth along the edge of the seaward net.

Local fishermen converged almost immediately, harassing the paddlers with threats and advancing on them with whirling propeller blades. The irate fishermen yelled "Why are you here? Go Home!" and then used a long wooden pole to attack and intimidate the surfers.

"Even though the fishermen used force to try and break us up, we held our peaceful stance. The feeling in the circle was of incredible strength," said Fraser.

With tensions escalating and the police sirens growing, the surfers quickly paddled back to shore where a distraught Panettiere fell to her knees sobbing, overwhelmed by the carnage she and the group had just witnessed.

"I couldn't believe how red the water was," said Panettiere. "The whales were so scared. Hopefully their deaths won't be in vain."

After hightailing it out of Taiji, the three-van convoy was stopped at the border of Wakayama prefecture by 30 policemen readied with a paddy wagon. After checking passports and questioning the group intently, the police waved the crew on their way.

Rastovich expressed extreme sorrow, saying, "With many nets and kill boats waiting beyond the cove, the fishermen's intense desire to kill left no room for escape."

Reflecting on the day's experience, a somber Lucas expressed that the worst part was that the whales are probably all dead by now. "We couldn't save these whales, but hopefully shining the light on their deaths will save others." 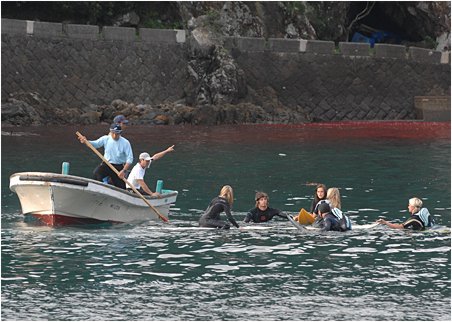 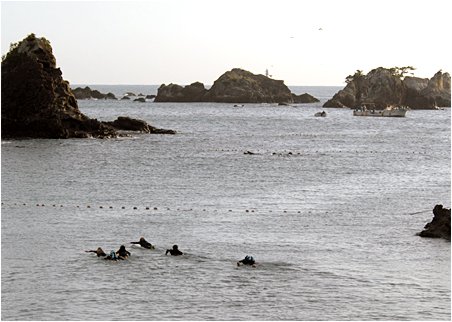 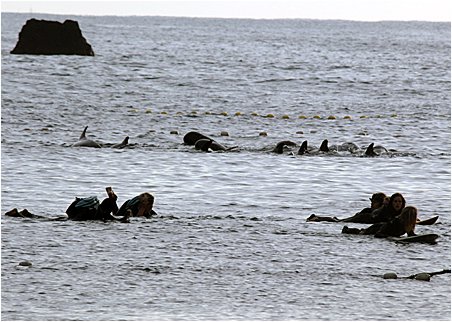 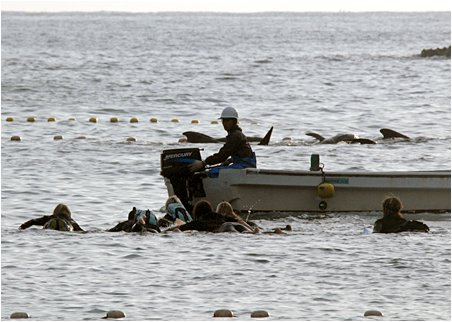