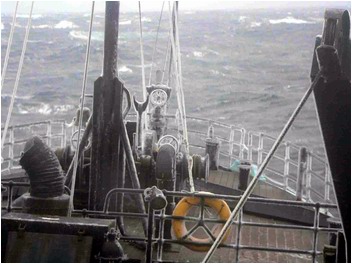 Report from the Farley Mowat
By Captain Paul Watson

Noon ADT
Position: Off the Coast of Northeastern Newfoundland

On this day in 1912, the Cunard liner Titanic sank near where we are now. Today is the 93rd anniversary of the tragic death of 1500 passengers and crew from the "ship that could not be sunk."

The Titanic was sunk by an iceberg. Yet in this entire voyage we have not seen a single iceberg. In fact we have not seen any ice floes for days. All the ice that is left is being smashed onto the rocky coast of Northeastern Newfoundland and Southern Labrador.

I guess there were more icebergs in the days long before global warming. We've been looking for icebergs but so far we have not seen a single one.

Today I worry about the threat that global warming poses for the harp and hood seals. Every year there seems to be less and less ice for these ice-loving seals. This is a threat that Canada, for all its pretensions about being concerned for global warming has not, and refuses to, consider.

The destruction of the natural habitat for the seals is not a factor taken into account by the Department of Fisheries and Oceans when it comes to their so called "management" policies with seals.

Canadian media and the Canadian government continually preach that the harp seal is not a threatened species.

I disagree. It is a threatened species and the seal slaughter is just one of the factors contributing to the diminishment of the species. Harps and Hood seals are in trouble. In fact, most marine mammal populations are threatened by a very significant and specific factor.

It all comes down to not enough carrying capacity due to increasing human population growth, and correspondingly, the increased demand for resources, especially fish and marine crustaceans. Humans are literally stealing the carrying capacity of the whales, dolphins, seals, turtles, sea-birds, and fish. Soon we will have more fishermen than fish.

Back here on the high seas, the Farley Mowat still has our very own Canadian Coast Guard ice-breaker escort. The Henry Larsen has been with us since Monday and it is now Friday. Four solid days being escorted by a vessel devoted to making sure we don't take pictures of sealers.

Considering the fuel and operating costs, the wages of the crew on board and their provisions, I think a conservative estimate would be about $25,000 per day which means they have spent at least $100,000 so far protecting sealers from the world's most deadly weapon - the camera.

We have even been accused of terrorism. Photographic terrorism I suppose. I admit, many of our crew are armed with weapon of mass information distribution.

Mathieu Mauvernay, one of our crew recently departed at the port of St. Pierre, sent an e-mail today saying that our video of the sealers was broadcast last night throughout all of France. That's what my old friend Bob Hunter would call the successful delivery of a "national mind bomb."

We are still being smashed and bashed out here on the water.

The latest forecast received at 0300 hours was:

A storm well to the north of the Newfoundland marine district will reach southern Greenland this afternoon. Storm force westerlies over the Belle Isle Bank will diminish gradually as the system moves further away. Elsewhere diminishing west to northwest winds are forecast for today. A large high pressure system over Québec will move southwards to Cape Cod late Saturday. Ridge of high pressure associated with the high will establish itself over the southern Grand Banks. Winds near the ridge will be light to moderate northwesterly. However southwesterly winds over central Newfoundland waters will strengthen to strong on Saturday. Marine interests are advised that a storm warning is continued for the Belle Isle Bank. Gale warnings are continued for Belle Isle and Funk Island Bank waters. Freezing spray warnings are continued for Belle Isle northeast gulf Gulf-Port au Port the east coast to the north of Cape St Francis the northeast coast and for Belle Isle Bank. An ice pressure warning for strong ice pressure is in effect for The Baie Verte Peninsula to Twillingate today. In addition heavy wave action is expected today along exposed north facing coasts of northeastern Newfoundland from Notre Dame bay to Conception Bay.

The seal slaughter was scheduled to open again this morning but we have heard nothing about it. The weather reports indicate that it would not be practical to attempt to send the sealing vessels out to kill seals. However, money is a powerful motivator and a few might attempt it.

From where we are, the weekend looks promising for more nasty weather and every day delayed is a benefit for the seals. The crab fishery opens tomorrow and some of the sealers may decide to go back to crabbing although other crab fishers are threatening to strike for higher profits and may look on the killing of seals as strike pay. We shall see.

On board the Farley Mowat, we are trying to keep things shipshape in an unstable world of motion and sounds. The ship is wearing a coat of brine ice and the wind never ceases to howl, whine and whistle as it pry into every crack and pore of the ship filling the companionways with freezing air.

The ship is moving now with the waves and swell, surfing actually, riding the crest and sliding down the back side as we watch a rising wall of water reach skyward in front of us before being lifted up the face of another swell coming in from behind.

As I type, I have to continually clench my fists to keep the circulation going. It is cold, miserably cold, and colder still since our water heater broke yesterday.

In the lower starboard accommodation space, cold seawater sloshes back and forth beneath the bunks of some of the crew. The deck crew are continuing to patch up our breached stern tube and the flow of water has been greatly decreased although not yet eliminated. It is too rough to cook so the meals are cold and hot coffee is becoming a rare luxury.

We came to confront the sealers, but we have been forced by the elements to be spectators of Mother Nature's rage as she hurtles waves, wind, ice, and snow onto the rocky coasts of Newfoundland. In truth however, Nature has done more for the seals this week than any of us mere mortals could ever do. All we can do is cheer her on as we continue to ride the tempest off the coast.

It has been 54 days since we left Bermuda and embarked on this campaign. It has been a long, hard, frustrating, and often miserable voyage, but the crew still remain in high spirits. We are out here defending life in the oceans and that is a wonderful feeling.