While crew passports were being stamped on the Bridge of the Steve Irwin, Pitcairn Mayor Mike Warren presented a Pitcairn Islands Plaque to Captain Locky MacLean, who in return gave a Sea Shepherd flag to the Island and its residents.

Pirate Pawl, 7th generation descendant of Bounty Mutineers, expressed: “We’re crazy about whales and we love what you do, good on ya!”  He and his partner earn a living on the island selling Pitcairn t-shirts, jewelry made from Mother of Pearl, and pirate bandanas. They generously donated several bandanas, and t-shirts were exchanged in recognition of the similar Jolly Roger logos that Sea Shepherd and the Pitcairners share.

The island’s only link to civilization is a cargo ship that calls three times a year from New Zealand. Several Pitcairners enquired about much needed spares and oil for a generator, which was running low. Our engineers mustered together some last minute supplies, and it was time to head to land.

A visit to Pitcairn is not complete without going ashore, and half the crew was able to head into Bounty Bay on the Island Long Boat and brave the massive breaking swells across the entrance to the Landing. Much like the mutineers on the Bounty did over 220 years ago, Pitcairners still use a long boat to get through the surf and into shore (although oars have been replaced with a powerful diesel inboard).

After a two-hour tour on land, the sun was setting and a chop was starting to wrap around the lee side of Pitcairn, disturbing the fragile protection the island was affording the Steve Irwin. As the MOSS pulled away and last warm goodbyes and thanks were shouted across the decks of both vessels, Sea Shepherd weighed anchor and pointed the bow North East leaving behind the orange flickering lights of Adamstown.

With over 3000 miles to our next landfall in Panama, pulling away from Pitcairn seemed like leaving behind a bustling hub of civilization, hidden away in this remote part of the Pacific. 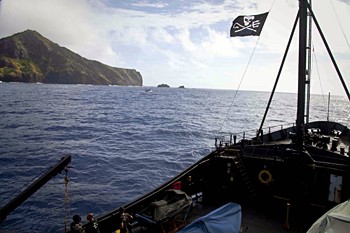 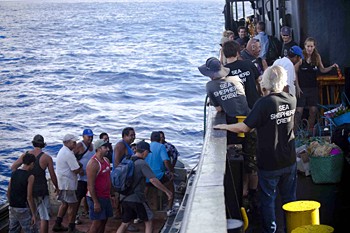 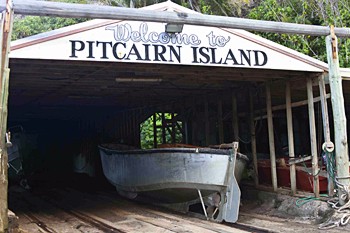 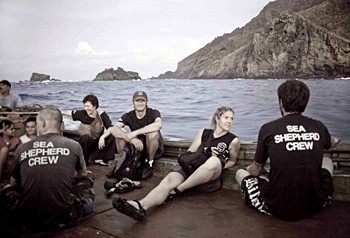