Steve Irwin Tailed by Somali Pirates in the Gulf of Aden

Today three skiffs with six men in one, five in another and two in the third approached the Steve Irwin and tailed the vessel for a few miles. They appeared to be uncertain and backed off to check out a container ship a three miles distance from the Sea Shepherd ship.

Captain Lockhart MacLean notified the coalition naval authorities in the area and warned the Maersk container ship that the skiffs were approaching them.

To the pirates it must have looked like the Steve Irwin was a warship escorting the container ship. The skiffs backed off and both ships successfully entered the Red Sea.

The Steve Irwin is now heading to the Suez Canal. 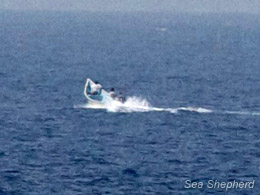