The Japanese fleet departed from Japan on November 19th for the Southern Ocean. The Sea Shepherd ships Steve Irwin and the Ady Gil are scheduled to depart from Australia on December 7th. 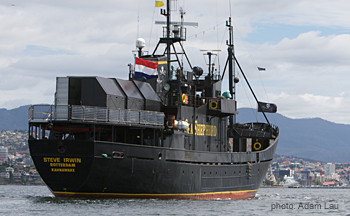 The Mainichi Daily News of Japan asked this question this weekend: With its modus operandi becoming ever more violent in recent years, could the group bring about the end of whaling in Japan?

Their activities have caused catches in the past two years to drop to just 60-75 percent of expected figures, and this year Watson says he wants to get this figure down to at least half.

With even the Japanese media acknowledging the impact of Sea Shepherd interventions, the prognosis for toe 2009/2010 whaling season looks promising for the whale defenders.

“We need to keep the financial pressure on the whaling fleet,” said Captain Paul Watson. “We have cost them their profits for the last three years and we have them on the ropes economically. I am confident and hopeful that we can deliver the knock-out punch this year and that we will bankrupt these poachers.”

Sea Shepherd will be the subject for the third season of Animal Planet’s Whale Wars.