Captain Pete Bethune of the Ady Gil is returning on the campaign as an officer onboard the Steve Irwin. Four of the six Ady Gil crew disembarked from the Steve Irwin in Fremantle during its brief lay over.

“There is nothing that is easy about this campaign this year,” said Captain Paul Watson. “The supply lines are long, the hunting area is vast, hostile, and remote, and this year the Japanese are more violently aggressive than any year before. Despite these obstacles, I am confident that we will once again be able to diminish kill quotas and that we will be able to save the lives of hundreds of whales.”

Additional special thanks to Fremantle MLA Adele Carles and Helena Everkrans-Smith for helping to facilitate lodging for the returning Ady Gil crew after their high seas ordeal. 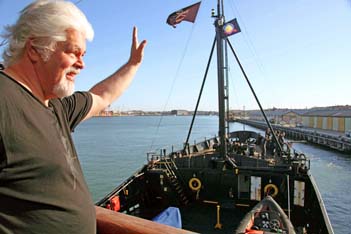