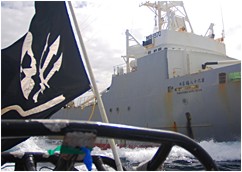 The Fukuyoshi Maru No. 68 is a mystery ship. It's a large fast drag trawler without fishing gear, bristling with surveillance gear and it has been tailing the Sea Shepherd Conservation ship Steve Irwin for a week, always keeping a distance of 7 to 10 miles away.

For the last day, the two ships have been moving rapidly to the east towards the location of the Japanese fleet. Both ships have been threading their way through a floating archipelago of small to medium sized icebergs.

The Delta crew did not attempt to damage the Fukuyoshi Maru No. 68. "They are not part of the whaling fleet," said Captain Paul Watson. "Although there is no doubt they are connected to the fleet. We were not going to waste our disruption materials on a vessel not involved with the actual killing of whales."

The Steve Irwin continues to head eastward towards the Japanese whaling fleet which continues to lie some 20 hours to the east.

"They know we are coming and they have two choices. They can keep running and not kill whales or they can stop to catch whales and we will catch up with them," said Captain Watson. "We prefer to engage them but we have the satisfaction of knowing that while they continue to run from us, whales will not be killed." 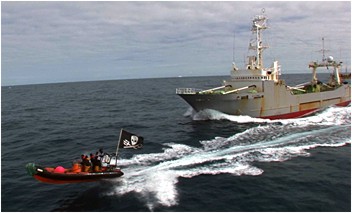 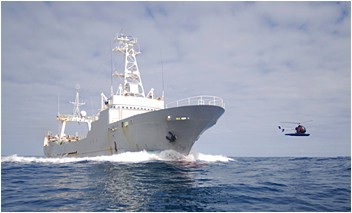