At that point, in the interest of safety, I ordered the Delta inflatable and helicopter to return to the Steve Irwin.  We then retreated to a safe distance away from the waters claimed by Libya. The two vessels Tagreft and the Rabbah 1060 pursued and continued to fire flares at the us. We were able to lose them quickly.

The Captain of the Cesare Rustico radioed the Tagreft and Rabbah 1060 to, "do whatever you can to damage them so they will never return."

The Captain of the Cesare Rustico said that the Libyan Navy was within a few miles and closing in. However there were no Libyan naval vessels within thirty miles on the radar.

Yesterday the Steve Irwin requested the assistance of the Greenpeace ship Arctic Sunrise to liberate the estimated 800 Bluefin tuna in this cage but they declined to assist. A contact within Greenpeace informed us that under no circumstances was Greenpeace to enter waters claimed by Libya..

The Steve Irwin is now heading towards Cyprus and Turkey in search of Bluefin poachers. 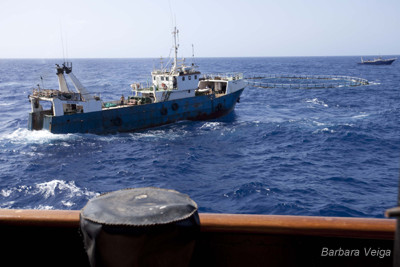 Fishing vessels, with the Misurate 96 in the foreground 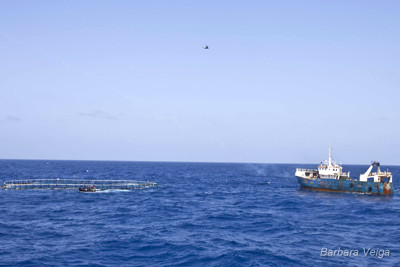