SOS – Save Our Ship the Steve Irwin! – Update and Continuing Appeal

Since our initial appeal just six days ago, those of you who love marine life have given us a record number of donations in this timeframe and we are deeply touched by your outpouring of support. As of Sunday, July 24, we have estimated donations at USD $442,279.37 – this is fantastic, but we are still far from our goal. We hope that those of you who have not donated yet may find a way to do so. 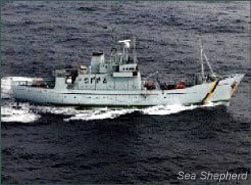 The Westra, purchased in 2006I have worked with Sea Shepherd for 16 years now so I can’t help but get sentimental during this effort to Save Our Ship. I hope you share our love for this ship that has done so much to defend ocean wildlife. The 174-foot vessel Steve Irwin is very precious to us! In the fall of 2006, when we first found the ship in Scotland it was named the Westra – and had proudly served as a Scottish Fisheries Protection vessel. Sea Shepherd bought the ship with the help our generous supporters, renamed it the Robert Hunter (after Captain Watson’s good friend with whom he founded Greenpeace), and sailed to the Antarctic to surprise the illegal Japanese whalers! With the ability to sail at 16 knots, the Robert Hunter kept the whale killers on the run more successfully than we had done in the past.

In 2007, we officially re-named the vessel the Steve Irwin, in honor of the late Australian conservationist. Just before his untimely death, Steve stated his intention to come to Antarctica with us to defend the whales alongside Captain Watson and our brave crew. Therefore, it was fitting that he should be able to join us in spirit with his name emblazoned on the fastest and most effective whale protection ship in the world.

In the short five years since its purchase, the ship has gone on over 30 voyages and carried hundreds of dedicated crewmembers to remote places where ocean wildlife needed defending. There are untold man-hours invested in the ship in the form of maintenance, repair, and improvements. In addition to the donated labor, there have been a myriad of material gifts brought to the ships by caring supporters including parts, tools, supplies, and food of all kinds (and remember, those edible treats are the stuff that fuels our crew to do what they do best!). 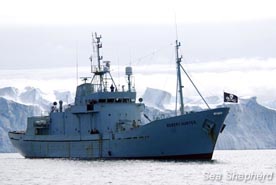 The Robert Hunter, on campaign in 2006Because Captain Watson sails the Steve Irwin and leads our campaigns from it, we call her our flagship. “The Steve” serves as our command and control center during campaigns and is also the base for our helicopter.  Since our purchase of the Steve, we have built a special enclosure on the stern as well, to protect the delicate blades of the aircraft, and shelter the precision machine them the rust-inducing salt spray of the oceans – and the Japanese whaling fleet!.

That brings me back to our current dilemma! We need the Steve Irwin to be released from detention in Lerwick, Scotland so that the vessel can head to the Faeroe Islands for its next assignment. Our objective is to have the Steve connect with  our trimaran vessel Brigitte Bardot (formerly the Gojira) as soon as possible and get to work intervening against the cruel pilot whale slaughter the Faeroese call “The Grind.” Once our mission there in the North Atlantic is accomplished, this work-horse of a conservation vessel will head back down to the Southern Ocean Sanctuary to once again protect defenseless whales from the ruthless harpoons of the illegal Japanese whalers.

More than ever we need our support crew – YOU – to help us overcome adversity and carry on with the mission at hand.  If you can give, please know that whatever amount you can afford will truly make a difference. If you have already given, thank you so much for helping us Save Our Ship. If you can’t give at this time, please consider sharing this posting with your friends, family, and circle of influence via Facebook, Twitter, and or e-mail. Your support to us is valuable in whatever form it takes – and we thank you too!

Thank you for helping us defend ocean wildlife worldwide,

Please share this widely with your family and friends! 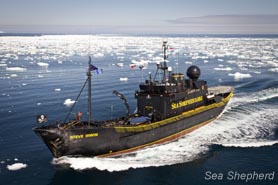