On Friday, September 6, 2002, the P/B Sirenian from Sea Shepherd Conservation Society caught another boat fishing illegally within the protected waters of the GNP Marine Reserve.

On Monday, September 9, 2002, Pablo Guerrero, Head of the Marine Resources Unit of the Galapagos National Park, reported that the Sirenian had caught a semi-industrial vessel fishing illegally within the Galapagos Marine Reserve at a site known as "Bajo 90" in the southern part of Galapagos.

The Sirenian had left Puerto Ayora on Wednesday, September 4, to provide logistic support to the conservation activities displayed by the Galapagos National Park Service and to patrol the waters of the Marine Reserve. Joining the crew was a member of the Ecuadorian Navy, Sergeant Cr San Miguel, complying with the 2002 agreement signed between the Ecuadorian Navy and the Galapagos National Park. 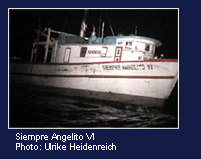 Friday, September 6: After motoring around the west and central part of the Archipelago, the Sirenian took a NW course around the northern tip of Santiago Island. At 8:08 a small fishing boat was found anchored in a bay were fishing is not authorized. After inspection, it was determined that the boat was not fishing illegally, but only spent the night in the sheltered bay. At 8:30 am course was continued due ESE. South of Isabela a ship was spotted on the horizon, so course was changed to have a closer look.

That night, the radar picked up something, but it was too small to determine if it was a boat. Once the Captain was sure it was a vessel, the Sirenian pursued it. A fishing vessel was finally seen, fleeing at full speed, and with no lights on. After three warning shots were fired, the ship gave up and turned by. It was the F/B Siempre Angelito VI, registered in Manta, north of Guayaquil, on mainland Ecuador. 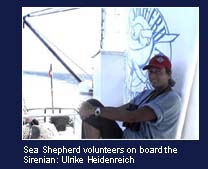 Captain Fulton Vivas, from the Sirenian, boarded the illegal fishing boat to review their logbook. It was determined the boat was fishing illegally and that it would be escorted to Puerto Baquerizo Moreno, San Cristobal Island. The capture took place at 1° 50 29" S and 90° 00 03" W. The other captain offered Captain Vivas and Sergeant San Miguel a bribe of $ 2000 each. The bribe was turned down.

At 4.30 am of Saturday, September 7, 2002, the Sirenian and the Siempre Angelito VI arrived to Puerto Baquerizo Moreno, San Cristobal Island. The fishing boat had to tie up at the Sirenians stern because they didnt have an anchor. They had been out fishing for 8 days, with 19 men on board of an 55 fishing boat, and a catch of around 20-25 fish. 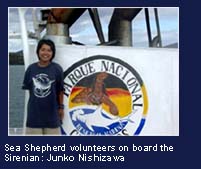 The GNP and the Ecuadorian Navy arrived at 6.30 am to go on board to do all the necessary paperwork for an administrative trial, to be led by the Director of the Galapagos National Park on the basis of violation to the Special Law for the Galapagos Province, and a judgment from the Port Captain Authority in Puerto Baquerizo Moreno, San Cristobal Island, for violation of the Marine Policy Code.

The detained vessel was not captured with its fishing gear in the water, and neither were species of illegal trade found in her holds. Nonetheless, in was in open contravention of the Special Law for the Galapagos Province that forbids industrial and semi-industrial fishing boats trespassing and fishing in the Galapagos Marine Reserve.

Once again it is proved that combined efforts yield much more successful results!

This report is made possible thanks to the information provided by Sea Shepherds volunteer/observer, Ms. Ulrike Heidenreich.