Shark Killers Get No Favors from Sea Shepherd

Shark Killers Get No Favors from Sea Shepherd

At 0430 hours, the Farley Mowat saw a distress flare and approached a fishing vessel in waters 270 miles off the coast of Colombia. The vessel reported that they were unable to operate and needed lube oil. They wanted 75 gallons of lube oil. Captain Paul Watson asked them what they were fishing for and the vessel replied they were longlining for sharks.

There is an international ban on shark finning in the Eastern Tropical Pacific. This vessel was illegally setting longlines to target sharks.

Captain Watson refused their request for oil and proceeded back on course for the Galapagos. "I realize that the vessel was in a difficult position but the ship was afloat, the crew was healthy, the weather was calm, and there were other fishing vessels in the area. Under these circumstances, I cannot justify giving hundreds of dollars of lube oil to a vessel engaged in illegal fishing activities."

The other fishing vessels in the area ignored the distress signal from the Colombian longliner. The longliner cursed the Farley Mowat for not helping. Captain Watson found that amusing. "Their fellow sea rapers refuse to help them and they curse us for not giving them oil. The fact is, they would have cursed us the moment after they took our oil."

Fishermen say that it is the law of the sea that mariners help other mariners in distress. However, in every case in the past where Sea Shepherd assisted a fishing vessel in distress, Sea Shepherd was rewarded with attitudes of contempt by the rescued fishermen.

In 1995, the Sea Shepherd vessel Sirenian rescued the crew and some equipment from a burning Alaskan salmon packer. The vessel sank and Captain Watson delivered the American crew to Ketchikan. The rescued American skipper responded in the press that if he knew who was rescuing him, he would have said, "Thanks, but no thanks." 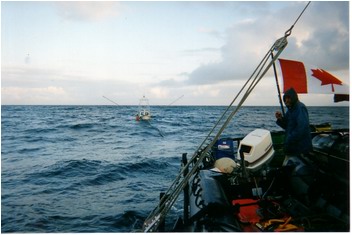 As the Farley Mowat left the fishing boat in their wake, Captain Watson said, "My sympathies were for the sharks and not their killers. It is these boats and these men who are exterminating these magnificent creatures. Without oil their boat can't run, and if their boat can't operate, they can't continue to kill sharks. Our decision to refuse them assistance was made to benefit our clients - the tiburons, the sharks, and not their killers." 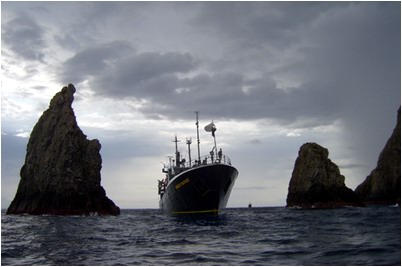 The Sea Shepherd ship and crew had just left Malpelo Island of Columbia (as pictured above) where they were delivering supplies to the Park Rangers who
patrol the island for poachers.