Armed with hours of video footage and photographs from a recent tiger shark expedition in the Caribbean, production of the Shark Angels short feature documentary is well under way.

The Shark Angels alliance-consisting of Kim McCoy, Sea Shepherd Conservation Society Executive Director; Julie Andersen, Shark Savers Director; and Alison Kock, Save Our Seas Foundation Head Field Biologist-hopes that this short film will help to open the hearts and minds of the public and increase awareness of the plight of sharks and their struggle for survival as a species.

An underlying goal of this project is to capture the Shark Angels interacting with sharks in a way that will show a softer side and build on the work that Rob Stewart has already begun with his award-winning film, Sharkwater.  In doing so, McCoy, Andersen, and Kock hope to bridge the gap in human understanding and alter the public perception of a horribly misunderstood species, resulting in a call to action.

"Sharks are being killed for the vanity of humanity," said Sea Shepherd Director, Kurt Lieber, who joined the Shark Angels team on this expedition. "The Asian market demand for shark fin soup is driving many populations of sharks to the brink of extinction. The Shark Angels project is one way to raise the awareness of the plight of the sharks, and anyone who sees it will come away feeling as I do, understanding that the hype that Hollywood and pop-culture has bestowed on sharks is not based in reality. Sharks are top predators in the ocean, and just like wolves, they have a place in the wild that no other animal fills. They are gorgeous, graceful, curious animals that need our help to assure that they survive this shortsighted assault on their ability to exist. The Shark Angels project has great potential to have people see for themselves how misunderstood these animals are."

With 100 million sharks being ruthlessly killed each year, there are not enough Sea Shepherds in the world to defend them against human greed and exploitation. By working together rather than duplicating one another's efforts, the Shark Angels alliance maximizes the use of limited resources and enables each arm-scientific research, education, and enforcement-to focus exclusively on its respective area of expertise. Recognizing the value inherent in a diversity of shark conservation approaches, the Shark Angels aim to make this issue accessible to the public and inspire people to demand the protection of sharks on a governmental level.

"Sharks have inhabited our planet for 450 million years, since before the time of dinosaurs.  If we are able to not only help people understand the vital role sharks play in ecosystems and the impact this has on all species, including humans, but also to dispel the myth that sharks are ruthless man-eaters, I will consider this project a success," said McCoy.

Putting aside years of misguided programming by the media and pop-culture that sharks are mindless killing machines, McCoy, Andersen, and Kock took a leap of faith and plunged from the M/V Shear Water into seas swirling with dozens of large predatory sharks.  In doing so, they discovered a world of unexpected beauty and fragility, and have emerged more resolved than ever to defend these magnificent creatures.

Sea Shepherd, now celebrating its 30th year of marine wildlife conservation, is proud to be a member of the Shark Angels alliance and remains strongly committed to increasing the protection of sharks and their habitats worldwide.

Below are some preliminary images from the expedition.  Stay tuned for the release of underwater footage! 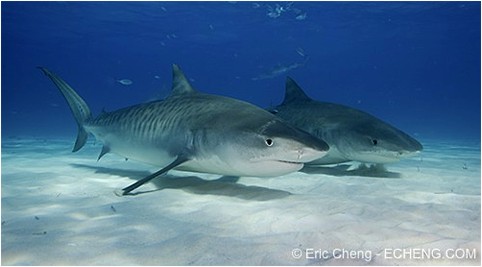