Shark Angels Arrive In The Bahamas

Shark Angels Arrive In The Bahamas

32 years after JawsTM showed a defenseless woman being dragged underwater and devoured by an insatiable monster, three women have come together to debunk that largely fictitious image.

Shark enthusiasts Kim McCoy, Executive Director of Sea Shepherd Conservation Society, Julie Andersen, Director of Shark Savers, and Alison Kock, Head Field Biologist of Save Our Seas, have joined forces to create a short feature documentary called Shark Angels. Representing the next generation of shark conservationists, these organizations are coming together for the first time to combat myths about sharks. Production begins on November 14, 2007 in the Bahamas.

Entering what was once the domain of daring male divers, often relying on the safety of cages, McCoy, Andersen, and Kock will challenge their own fears by swimming in open water with tiger sharks.  Aboard Jim Abernethy's vessel, the Shear Water, their mission is to get as close to as many large predators as possible in the most shark-inhabited waters of the Caribbean.

The goal is to prove that society has been fed mis-truths about sharks, who are actually remarkable creatures being ruthlessly chased toward extinction.  Desired for their fins, up to 100 million sharks are killed each year, with a growing number of shark species approaching extinction.

"Just this summer, Sea Shepherd exposed a major shark fin operation in the Galapagos, leading to arrests and the confiscation of tens of thousands of illegally obtained shark fins," said McCoy. "This sort of thing is happening around the world.  Shark finning is brutal and unsustainable, and it must be stopped."

"We are leading a movement to save the sharks, our oceans, and ourselves," said Stewart. "Shark populations are being wiped out, and nobody knows or cares about it, because what's out of sight is largely out of mind . . . we have to change that." Andersen added, "After seeing Sharkwater, we realized that we need to do more to combat shark myths and build awareness. Sharks need and deserve our help. In Shark Angels, we want to give the sharks a way to 'tell' their own story-capturing on film the fact that they are not our enemies, but vitally important and amazing ocean creatures."

The Shark Angels believe that society's irrational fear of sharks explains the general lack of desire to protect and conserve them. Through awareness and understanding, they aim to change that and ensure that sharks continue to play their important role in maintaining the oceans-and ultimately, in humankind's own survival. 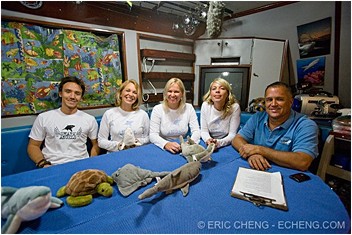