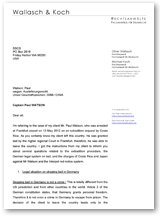 Q.: What is the extradition procedure in Germany as it pertains to this case?

A.: In the case of Mr. Watson, we knew that besides the request of Costa Rica, there was also a ‘blue’ note issued by Interpol on charges from Japan against the client. This ‘blue’ note on the warrant from Japan has been active since 2010 and has not converted into a ‘red’ notice with Interpol during the whole extradition procedure with Costa Rica. But we learned that Japan was highly interested concerning the procedure with Costa Rica because they sent requests through Interpol Tokyo to the Higher Regional Court to gather more information on the procedure itself. This was absolutely unusual. The German authorities are allowed to extradite even without a special treaty with the requesting country. Therefore it was very likely that Japan would ask for extradition itself on a bilateral basis; after Mr. Watson left the country, we learned that such an extradition request was forwarded by the Japanese Embassy through the Ministry of Foreign Affairs to the General Public Prosecution Office in Frankfurt.  The scenario would have been that Mr. Watson would have been extradited to Costa Rica, and then extradited after the procedure to Japan.

These facts show, that there was a link between the extradition request from Costa Rica and the upcoming extradition request from Japan. Having in mind that the president of Costa Rica visited Japan at the end of 2011, having in mind that Japan granted an enormous amount of money for “environmental protection” in Costa Rica, it is obvious that these two countries have a very close relationship.

Q.: Is the Interpol ‘Red’ Notice a warrant and what is its impact?

Q.: What is the impact of the ‘Red Notice’ on Sea Shepherd Conservation Society (S.S.C.S.)?

A.: Because of the fact that these are individual cases and charges against Mr. Watson (in Costa Rica and in Japan) which are as stated probably politically motivated, there is no impact on the work of S.S.C.S. as an NGO itself; it is a general principle that criminal charges are against individuals, not against legal bodies.

Q.: Will Captain Watson be able to travel for the upcoming Antarctic and other campaigns?

A.: “I am convinced that Captain Paul Watson is able to continue his work, even with these bogus charges against him,” Wallasch said.

In speaking about Japan’s transparent attempts to thwart Sea Shepherd’s campaigns, Susan Hartland, Administrative Director of Sea Shepherd, had this to say:  “The warrant and ‘blue’ notice generated is just another feeble attempt by Japan to try and keep us from our mission to protect, conserve and defend our oceans,” she said.  “We operate within the legal confines of the United Nations World Charter for Nature. We are an enforcement entity acting legally against their relentless and archaic illegal whaling operations in a designated sanctuary and, as such, we will continue our direct action to protect the oceans and the wildlife in and around it.  Our supporters expect no less and that is what we will continue to deliver.  Our supporters stand by us and we stand by Captain Watson, all the other captains of our ships, and all of our courageous crew,” she said.

Hartland added:  “Of course, we know that Japan would love nothing more than to have their own ‘red’ notice issued on Captain Watson. They tried for ‘red’ but Interpol recognized their attempts as politically motivated, so they were forced to settle for a ‘blue’ notice instead,” she said. “Colluding with Germany and Costa Rica, Japan tried to extradite him, they have brought suit against us in the US, they have harassed and arrested Sea Shepherd crew members, and charged them with benign or bogus offenses when they’ve had the chance,” she said.

“Nothing Japan does will stop us from returning to Antarctica this season with four vessels and four crews of committed and passionate volunteers to shut down the Japanese whaling fleet,” she added.

In 2010, when the initial ‘blue notice’ for Captain Watson was issued by Interpol, Captain Watson knew it was as a result of Japan wielding their political and financial might once again, just like they continue to buy off member nations of the IWC.  At the time, Captain Watson had this to say: "Give me my name on a blue list, the red list, the black list, or the death list, for it is preferable to the I-don’t-give-a-crap list.”